Back on track: senior Brandt Doty training again after being hospitalized during cross-country postseason 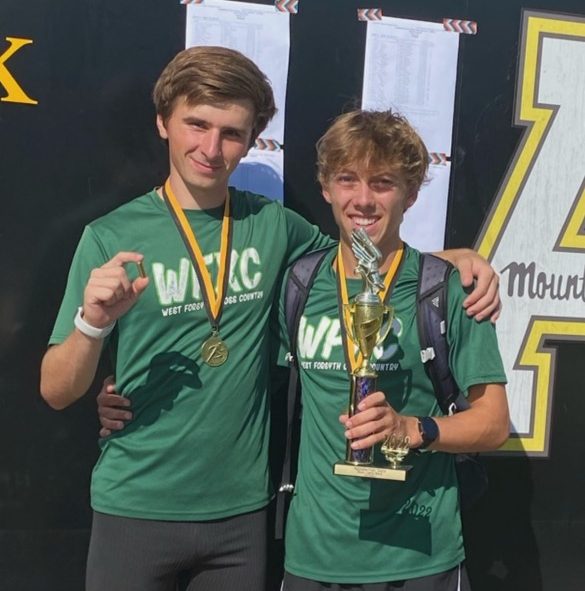 Submitted photo Brandt Doty, right, with teammate Wesley Haggstrom, couldn't compete at the Midwest 4-A regional cross country meet or state championships because of illness. He's getting back up to speed now with his training for indoor track and field.

On the Monday morning the week of the Midwest 4-A regional championship meet in October, West Forsyth senior cross-country captain Brandt Doty woke up with his face extremely swollen. He headed to the hospital where they diagnosed him with cellulitis, a bacterial skin infection, and the flu.
He stayed in the hospital for two nights, and then was sent home and directed to cough as much as possible to try and clear his lungs. By that Friday, his chest and shoulders began to hurt, so he went back to the emergency room. Unfortunately, he learned he had a hole in his lung — from coughing, ironically — and wouldn’t be able to run in the regional meet the next day.
“I got out of the hospital the next Monday and I was good to do everyday things, but I couldn’t run or lift or anything like that,” Doty said.
This meant that he wouldn’t be able to compete in the NCHSAA 4-A state championship meet that Saturday either.
Doty was consistently the No. 2 runner on the team this past season before getting injured. He recently broke the school record for the 5k along with senior teammate, Wesley Haggstrom (15:34) with a time of 15:48 — the second fastest in school history.
“I was really excited once we got into track to keep it up, keep breaking times, breaking records. So, I just want to get back to there and do my best,” Doty said.
Doty has been able to get back to training this past week.
“I’m working my way back, it’s just going to take some time,” Doty said.
It has been challenging for him to get back to his previous level of training before he was forced to take a break.
“When we’re running together, an 8-flat pace feels like 7-flat,” Doty said.
He’s faced running injuries before but being sidelined from all physical activity was a more significant setback.
“I’ve been hurt where I can’t walk for a couple days, but it goes away and I’m able to get back out there, but this was no activity for six weeks so I couldn’t even stay in shape or cross train,” Doty said.
Despite the team not advancing to the state meet until this year, Doty and Haggstrom have each run in the state meet as individual qualifiers since their freshman year.
“I was excited that the guys made it to states. All of them — except for Wesley — for the first time,” Doty said.
Even though he wasn’t able to race, Doty still went to cheer on his teammates.
“When I did the team cheer before I started choking up just because it’s so emotional right before the state championship and I was looking at all the runners line up. I was just really sad that I wasn’t there and didn’t get to compete,” Doty said.
His teammates also came to support him in his recovery.
“The first time I was in the hospital, some of them visited me. They were always encouraging me, checking on me, making sure I was getting better. The second time I didn’t tell them until after they ran in regionals that I was back in the hospital because I didn’t want to worry them, and afterwards they came and brought me food, visited me, and showed they really cared,” Doty said.
Doty is grateful to be so close with his teammates and for the network of people who support him.
“When you go through something like this, mentally it’s going to get you down. Especially when you’re coming back, you might not think that you’ll get to the level you were previously at, but you just gotta stay encouraged and know people have your back and will be there for you,”
He still has high expectations for his final upcoming track seasons.
“I think I’m going to train harder than I ever have, or at least that’s what I plan on doing. I want a chance to come back and show everybody what I could’ve done at states and what I’m capable of,” he said.