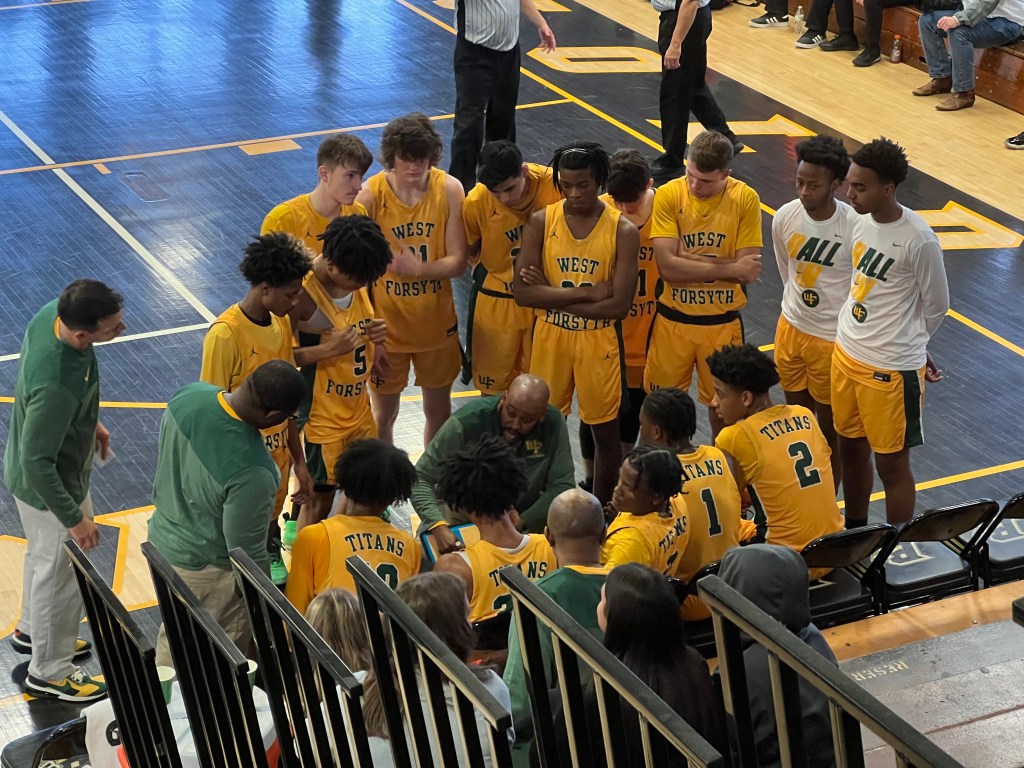 Marc Pruitt photo The boys basketball will pla three conference games this week and hopes to build momentum for the postseason.

Christmas has come and gone, and the Frank Spencer Holiday Classic might have been completed last week, but the West Forsyth boys basketball team found out that even though they didn’t win the tournament, they have plenty to build on.
West Forsyth (5-3) was the No. 8 seed in the Pepsi Bracket of the Spencer, and it had the unenviable task of playing No. 1 Mount Tabor in the first round last Wednesday at Reynolds. To make matters even worse, West Forsyth had just played on Dec. 9 at Mount Tabor and lost 81-61 to open the Central Piedmont 4-A schedule.
Playing just 12 days later, Mount Tabor (10-1) jumped out to a 23-11 lead after the first quarter and won the game 71-61.
“I thought we were prepared,” Coach Marlon Brim said. “I thought we came out the first half. We didn’t play our best game, but our second half, we made a run and cut it to around 6 or 7. And then we just couldn’t get over the hump. But I told the guys after that, if we play with the same energy and the same passion we did in the second half, then we can be as good as anybody in the city, and could be as good as anybody in the state.”
Cam White led West Forsyth with 20 points, Jacari Brim had 19 points, 13 rebounds and eight assists, and AJ Baskerville finished with 15 points and 15 rebounds.
“I thought our approach to the game was different,” Marlon Brim said. “I think when we first played them it was our first conference game, on the road, we didn’t know what to expect from them, and (Coach) Andy (Muse) didn’t know what to expect from us. And I kind of thought we got ahead of ourselves at Tabor.
“But I thought playing in the Spencer, we played the way we usually play – we got in the paint, we made shots, we didn’t have a lot of turnovers, but we had some breakdowns early in the first half that kind of hurt us. So, I thought our adjustment mentally and physically the way they played the game is the way we want to play the game.”
The result in last week’s game in the Spencer bears that out,
“We came out tougher, a little stronger,” Brim said. “I thought overall our approach was better than the first time.”
Before the Spencer, other than Mount Tabor, West Forsyth had played Southwest Guilford, North Forsyth twice, Parkland and Glenn.
“Tabor was the best team, no doubt about that,” Marlon Brim said. “And I thought that coming into the game looking at our schedule that we could either be, you know, 3-1 (before the first Mount Tabor game), 2-2, or whatever and we came into that game, I think, 3-1. So, we went on like a three-game winning streak. So, it helped us, but when you play a better team, you have to do the things that you’re supposed to do, and that you’re coached to do.
“And I don’t think we did that the first game. And we did that the second half of the Frank Spencer game against them.”
After the first Mount Tabor game, West Forsyth defeated Parkland 78-41 and Glenn 68-55.
West Forsyth played a consolation game in the Spencer last Thursday against No. 7 South Stokes, which lost to No. 2 East Forsyth 64-56 in the first round. West Forsyth defeated South Stokes 71-50.
“I thought we came out ready to play, and I think we have to mentally prepare the same way every game no matter who we play,” Brim said. “But it was refreshing to play somebody else (outside of conference). But that’s part of playing in the Frank Spencer. If you’re in the CPC conference you’re going to have five, six, or seven teams in our conference playing.”
West Forsyth was scheduled to play Walkertown last Friday in another consolation game, but tournament officials canceled all remaining consolation games because of concerns about inclement weather.
“I think it was shocking, and it was disappointing because you come off a win, you feel like, ‘Hey, we play again tomorrow,’ Let’s have the same effort, the same energy and come out with another win,” Brim said. “So, now we have to reschedule the game and scramble to play Walkertown again, which we will. But it was kind of disappointing”
The Titans practiced on Christmas Eve, as well as Monday, in preparation for the Sheetz Holiday Christmas Classic Basketball Tournament, which starts Tuesday at Southwest Guilford in High Point.
West Forsyth is scheduled to play High Point Central at 4:30 on Tuesday, and it will play either Southwest Guilford or Oak Grove in a winner’s bracket or loser’s bracket game at either noon or 7:30 on Wednesday. Win or lose, West Forsyth will play on Thursday.
“I think it’s great to play games over the Christmas break,” Brim said. “And it gives us a chance to see different teams.”
The West Forsyth girls are also playing in the Sheetz tournament, which is also at Southwest Guilford. They are scheduled to play at 3 p.m. on Tuesday against High Point Christian. It will play either High Point Wesleyan or Oak Grove at either 1:30 or 3 p.m. on Wednesday and depending on that result, will play again on Thursday.