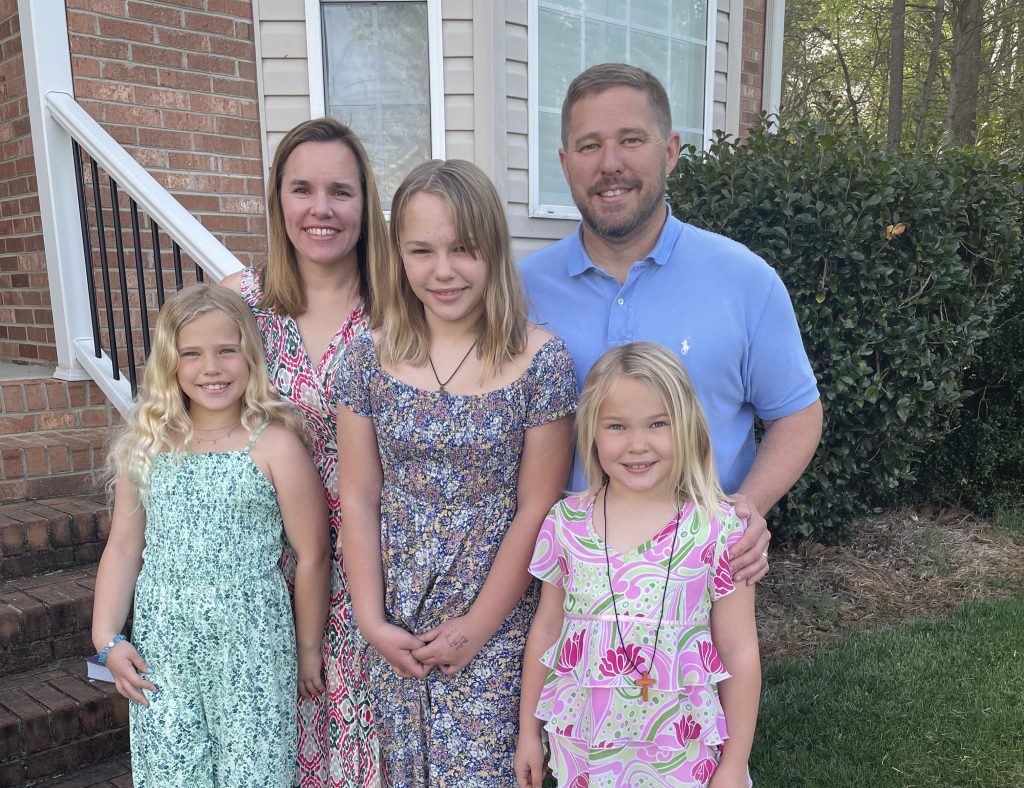 Laura Bilton and her husband, Scott, with daughters Emily, Hailey and Sydney

Laura Bilton spent her first 10 years as a child in Minnesota before moving to Winston-Salem. “Everything was snow when I was growing up there. We would ice skate, sled or build snow forts. When we first moved here, I wasn’t sure what to do,” Bilton said with a laugh. “My parents had us try different sports though like tennis and soccer.”
Bilton ran cross country and swam at Mount Tabor for a couple of years. Then she made the Mount Tabor dance team her sophomore team and enjoyed participating the remaining three years of high school.

During high school, Bilton’s family hosted a foreign exchange student from Germany. Bilton was the youngest of three children, however, having another high school student her age was a positive experience for her. “She was from Germany, and that summer, I went and stayed with her family for about four weeks. It was especially impactful because my family had just lost my brother tragically. It was a way for me to get away from it for a bit and embrace those experiences,” Bilton said.

Bilton had also expected to go further than Winston-Salem for college having a father who was a professor at Wake Forest University. However, after trying the overnight stay, Bilton realized that maybe it wasn’t going to be so bad after all going to school just a few miles from where she grew up.
“My sister was at Wake too, and my freshman year we were in the same 8 a.m. Spanish class,” Bilton said. “I was wanting all this change and independence, so it was kind of funny how it worked out. Although, my sister and I are very close, and I enjoyed having her there at the same time.”

Initially Bilton thought that she would be majoring in business.
“I always joke that if you go to Wake, you’re either pre-law, pre-med or business. So, I picked the third option,” Bilton said. “I also minored in religion because my faith has always been important to me.”
After graduating, Bilton headed to Raleigh to begin a career in banking. “I realized pretty quickly that I enjoyed most about banking was teaching people about their products. What I didn’t enjoy as much was where there seemed to be advantages for people with larger accounts then customers with smaller accounts. Having to explain to someone that because they bounced a check, they were going to have to pay substantial fees that impacted them significantly was hard,” Bilton said. “I knew I needed to change careers.”

Another significant moment in Bilton’s life came around the same time. Bilton met her future husband, Scott, through her high school best friend. “She had worked with him and thought we would be a good fit. My best friend arranged a get together in a large group setting so it took some pressure off,” Bilton said with a laugh.
After their first meeting, Scott and Laura hit it off and began dating seriously.
“I had decided that I was going to go back to school and get my master’s degree in elementary education. It was a yearlong program, and I’m so grateful I did it all at once while not working simultaneously. I spent that time focused on finishing it up and planning our wedding,” Bilton said.

The newlyweds stayed in Greenville after Bilton completed her program. “I began teaching first grade and stayed at the same elementary school for a couple of years. After that point, Scott and I decided we were ready to expand our family. We wanted to do that closer to home so we began applying near our families. Once Scott got his job at West Forsyth, we decided that’s where we would be,” Bilton said.
“I was offered a position at Old Town Elementary. I started off teaching first grade, then second, and once my first daughter was born, Hailey in 2010, I scaled back a bit and was a reading teacher,” Bilton said. “It was amazing to be in that environment because it seemed like all of us teachers were starting families, so we were very supportive of each other.”
The Biltons continued to expand their family with daughters: Emily in 2013 and Sydney in 2014. “We have been very lucky to have my mom help with the kids while Scott and I work. We have felt so fortunate for them to have that time with her. We couldn’t have done it without her,” Bilton said. “Family is very important to us. Finding careers that allow us to have that work life balance was imperative.”

Bilton continued to enjoy teaching. “In 2017 I went to work at Wake Forest in their education department. I stayed there for about four years. I taught students that were going to go into the teaching profession while working with teachers in the field with placement rotations. I also helped students that were still considering going into education in an introductory class that showed them what different types of schools were available in our county. What ended up happening was, I learned so much in the process too. We visited high schools, middle schools, magnet schools, private schools, etc. The purpose was for them to really understand what options were out there, and where they would be best suited if they chose that profession,” Bilton said.

Because Bilton was seeing education from a different perspective, she decided to go back to school. Bilton earned her Post Masters Principal Certification at the University of North Carolina at Greensboro.
“During this time frame I was able to still work at Wake and get my program completed. I would go teach a class online and then attend class for this program. It was one of those situations where because everything was remote at that moment in time, it was actually doable,” Bilton said. “After it was done, I took a position at Brunson Elementary School. Because of the class I taught at Wake, I had made a lot of contacts with the principals and administration staff at the various schools in the district which was helpful. And last year, I accepted a position at the Downtown School as the assistant principal. I love that I get to connect with the teachers and support them. I also have the opportunity to interact with the students because of their unique enrichment model. Seeing kids enjoying how they learn and wanting to explore makes my day,” Bilton said.

“It’s definitely been a windy pathway that got us to where we are today as a family. But we feel really lucky to have the support from our family, church, and our community and flexibility when needed with our jobs,” Bilton said.