A King on the rise 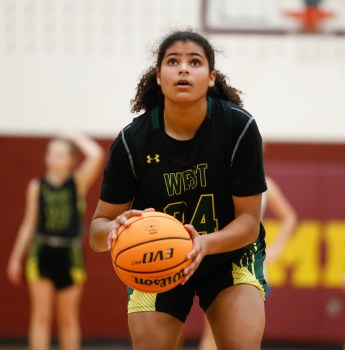 Brooklynn King is one of those basketball players who litters a stat sheet.
And King, who plays on the West Forsyth girls team, is doing it as a freshman.
King, who is 5-foot-8, is second on the team in points scored (68) and points per game (5.7), field-goal percentage (47%), third in rebounding (61) and rebounding average (5.1), and third in blocks (0.2).
“I think I’m pretty good as a player,” she said. “I think I’m pretty good as a teammate. I can always be better because you always have something to work on.”
A native of Huntington, W.Va., King moved to this area after her stepfather, Michael Howard, and mother, Elizabeth Howard, who both work for the Veterans Administration, moved here after her Elizabeth received a job promotion in 2018. She also has an 18-year-old stepsister named Aaliyah.
“It’s gotten better over the years,” King said. “In the beginning, I didn’t really know much, I didn’t know about people, but I grew up here, I’ve gotten to know a lot more people. Now, I have a lot of friends.”
One of the things that King has used throughout her life is basketball, which she started playing when she was 4 years old. She even questioned whether she’d make the varsity team at West Forsyth when she tried out this past October.
“I did have my doubts. I’m a freshman, so I didn’t really know,” she said.
Part of her being more comfortable trying out was doing the summer workouts with Coach Catrina Green of West Forsyth.
“It was pretty cool,” King said. “I got to learn about the upperclassmen on the team, and I got to learn how she coaches…And it was a pretty good experience.”
Even though King showed how well she can play during workouts and tryouts, she still stressed about whether she’d play on the JV or varsity team.
“I knew I would make a team, but (Green) made us think like we knew we had every spot open, even if it was an upperclassmen. You had to work to that spot on the team.
“I did stress out at the beginning because it was a new team. It’s a pretty young team, but most of us have gotten to know each other through the years. But me as a freshman, I guess I just try to know them all some more.”
At just about the midway points of the season King has enjoyed the experience of playing varsity girls basketball at a high level.
“It’s been pretty awesome so far,” she said. “I really love the team. They’re like family. And I think I’ve gotten better with how I’m playing since the beginning of summer to know. I feel like I’ve gotten better.”
West Forsyth lost at Mount. Tabor 46-35 on Dec. 9 in its first conference game, then lost at home four days later to Parkland 41-40. However, West Forsyth defeated Glenn 60-41 on Dec. 16 in Kernersville in the final game before the long Christmas break.
“We do lose some games, but since summer league and fall league we’ve been getting better as a team together,” King said. “We have a team that really likes working together. And it’s just really good for the team.”
West Forsyth didn’t play the week of Christmas, but it did play last week in the Sheetz Holiday Classic Christmas Tournament at Southwest Guilford in High Point. In the first round, West Forsyth lost to High Point Christian 45-32. And in a consolation the next day, West Forsyth lost to Wesleyan Christian Academy in High Point 40-32. That sent West Forsyth to the seventh-place game last Thursday against High Point Central, and West Forsyth won in a rout, 60-5.
“Since the Mary Garber (tournament in November) team I feel like I have been dropping a little bit,” King said. “Just personal issues, I guess. But since I’ve gotten that stuff out of my head — like the past couple weeks, ever since our game against Parkland, I think I have risen up a little bit from that point.”
King, as a freshman, gets to play alongside fellow freshman, Jeanna Baskerville, who is 6-2, and leads West Forsyth in just about every category.
“We’ve played with each other for the last year,” King said of Jeanna Baskerville. “We played on the same AAU team. So, we really know how to work together because if I get an open pass pretty much the first person I look for is her.
“And sometimes I can make those good passes to her, and we work really well together.”
There’s plenty of season left, plus both players have three more seasons left at West Forsyth. But this season, with only one nonconference game left on Jan. 14 against Atkins, West Forsyth has the majority of its remaining games against Central Piedmont 4-A teams.
“I feel like we can definitely rise up to be one of those better teams because we’re still in the early days of the conference,” King said. “So, every team has the chance to rise up.”