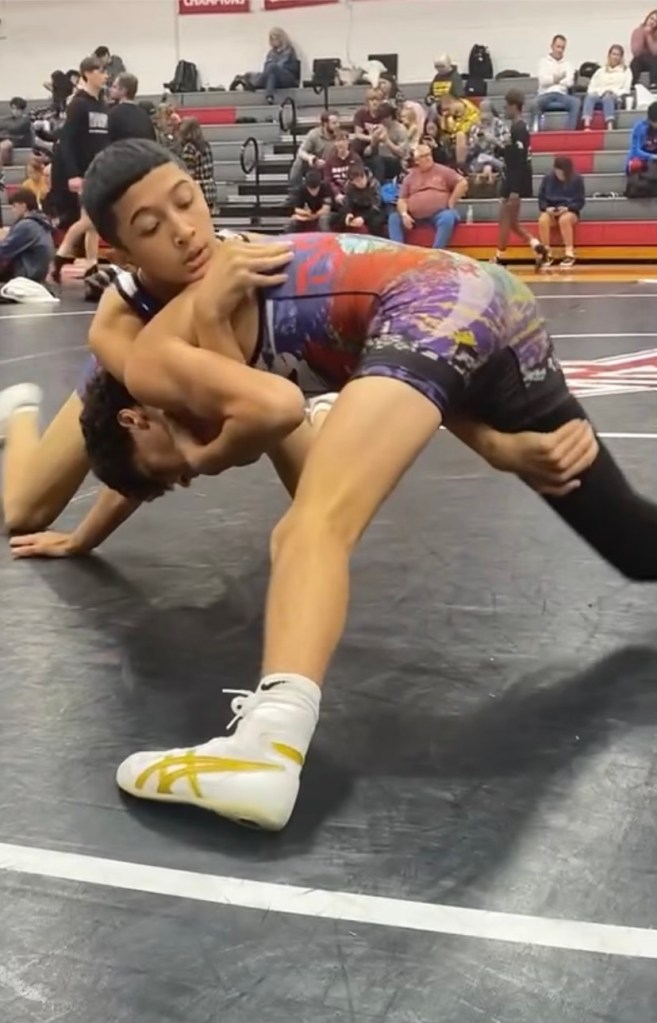 Bill Zahn photo Anthony Zahn (top) gets leverage during a recent match. Wrestling for West Forsyth has helped Zahn, a freshman, adjust to moving to the area from Illinois last summer

Anthony Zahn is the epitome of the old adage that “big things coming in small packages.”
Zahn, a freshman wrestler at West Forsyth, is in the 106-pound weight class.
But that is just a number to him.
Having moved to this area five months ago, Zahn was born in Libertyville, Ill., and lived in Waukegan, Ill., from the ages of 4-7, Zion, Ill., from ages 7-13, and Beach Park, Ill., from ages 13-14 before moving to Clemmons.
He started wrestling while he was in elementary school.
“My gym teacher was handing out fliers for wrestling and it sparked in my mind because I thought it was going to be like WWE (World Wrestling Entertainment),” Zahn said. “And when I first got (it), I was like, ‘This is completely different.’
“And so, from my first practice I was just hooked on the sport.” 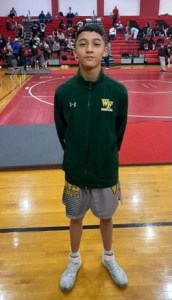 For many people at that age, wrestling around with friends is almost commonplace. For Zahn, it meant much more.
“I would say it was fun because it would give me something to do during free time instead of just laying down,” he said. “It would actually get me up, keep me in shape, and overall, just have fun doing the sport.”
Even moving so much as a young child was helped by Zahn wrestling.
“Most of the time when we moved it was during the offseason,” he said. “I had a lot of close friends because all of them lived in the same district because the cities I lived in were all in the same district.”
Even at a young age, Zahn was wrestling competitively in Illinois.
“I would go to a couple local tournaments,” he said. “I would take second or third (place). But as I started growing, I would start taking first, second and getting to finals. And I think it was my fourth year, I started going to a couple national tournaments. I’ve only placed at a few, but it was still fun to go there.”
As a freshman, it’s never easy to acclimate to a new city and a new school.
“I just had the opportunity to meet a lot of people,” Zahn said. “That’s what I really liked about it most. And because it was easy to find people I could connect with during school.”
Admittedly shy, Zahn said wrestling has afforded himself a new perspective.
“The sport has helped me open up, and helped me meet a lot of people,” he said.
“I thought that the area was really cool because it was completely new.
“And when I first saw West, I was like, ‘This is a really big school. I can’t wait to explore it. And it just looks really fun to go to.’”
And it just so happened that Zahn and his family moved to the area about three weeks before school started in August.
“It was a little nerve-wracking because it just happened in a snap,” he said. “It was just like kind of stressful because I had to focus on the move, I had to focus on unpacking, and I had to start focusing on school. So, it was a little stressful at first, but in the end, I think it was going to be worth it.”
Compounding that was Zahn being a small fish in a big pond as a freshman at West Forsyth.
“At first it was hard to find people I could talk to,” he said. “But I started finding people that I liked to talk to, and I like to think are what I call friends. So, at first it was kind of rough because since it was all brand new everyone was already in groups. I felt alone, almost.
“But then I started trying to fit in and talk to people. It worked out, and I have a couple friends I really like to talk to.”
Part of feeling more comfortable was taking part in wrestling workouts at West Forsyth. He’s become so comfortable that he’s strongly considering going out for baseball when tryouts start in February.
“On my first practice (sophomore) Cayden Glass came up to me and he introduced me to a few people, and that actually helped me start talking to them,” Zahn said. “And I’m really grateful that he actually came up to me and talked to me because I don’t think I would be as good as I am now.”
Another person who has been influential to Zahn is Jason Hooker, the Titans’ wrestling coach.
“Coach Hooker came up to me in gym class and he talked to me about he saw that I was interested in wrestling,” Zahn said. “And I was just telling him that I’ve been wrestling for seven years, I plan on wrestling at 106, and I hope I just have fun.”
Now, how does he keep his low weight as a high-schooler?
“I find it kind of easy to maintain my weight because I don’t eat a lot of junk food, and because my walk-around weight is around 107,” Zahn said. “It’s a really easy cut down because it’s only a pound.”
And Zahn has more than proven himself. Having wrestled this past weekend at the Holy Angels tournament in Greensboro, he was 16-5 heading into the week.
“I’m quite surprised I’m doing as well as I am right now because I’ve always been told that high is the best of the best,” he said. “And winning matches like these makes me more confident in myself.”