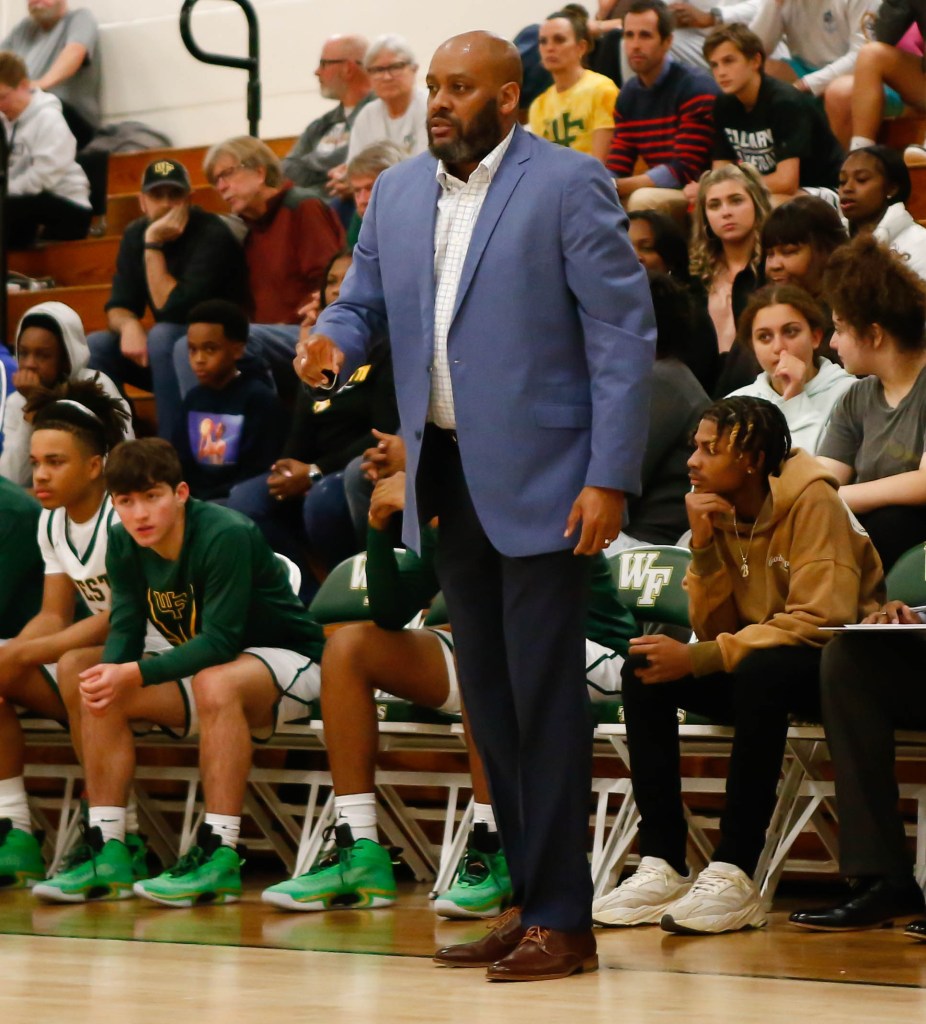 Playing five games in two weeks doesn’t sound like much, but it does if the two weeks fall within Christmas break.
That’s exactly what the West Forsyth boys basketball team has done for the past two weeks — playing two games the week of Christmas in the Frank Spencer Holiday Classic and following that by playing games last week in the Sheetz Holiday Christmas Classic at Southwest Guilford High School in High Point.
After losing to top-seeded and eventual champion Mount Tabor, in the first round of the Frank Spencer Pepsi Bracket, West Forsyth bounced back and defeated South Stokes the next day in a consolation game.
Two days after Christmas, Coach Marlon Brim of West Forsyth and the rest of the Titans played in the Sheetz Holiday Christmas Classic against High Point Central, winning 74-47.
“I thought we played pretty well (in the first round),” Brim said. “I thought we did some of the things that we usually do, and we changed some things between the Frank Spencer and the Sheetz tournament. So, we went into it with a different approach.”
Jacari Brim, the son of Marlon Brim, led West Forsyth with 23 points, AJ Baskerville had 18, and Cam White chipped in with 11 to help it defeat High Point Central.
The following day, West Forsyth played Southwest Guilford in the semifinals. That game was a rematch of the opening game of the season where Southwest Guilford won 60-58 in Clemmons. This time, playing on Southwest Guilford’s home court, Southwest Guilford won 70-54.
West Forsyth led 36-33 at halftime but was outscored 37-18 in the second half. Jacari Brim led the Titans with 15 and Baskerville had 13 in the loss to the Cowboys.
“I was very confident in that game,” Marlon Brim said. “I thought we had control of it. We took control of it early in the first quarter. And then we came back and took the lead at halftime. And then the third quarter we came out flat.
“And we just couldn’t get it going in the second half.”
West Forsyth played in the third-place game last Thursday against Southern Guilford but lost 72-58.
“We came out, the first game (against High Point Central) I thought we had energy,” Marlon Brim said. “The semifinal game against Southwest, and (last Thursday) I thought we came out a little lax. I don’t know if that was fatigue or just not being mentally prepared to play a game.”
In the loss to Southern Guilford, Baskerville led West Forsyth with 18 points, White had 12, and Jacari Brim scored 11.
“That’s what we talked about (the last two days of the Sheetz tournament) after the games, just being consistent,” Marlon Brim said. “And I think a lot of it is youth, are varsity-level experience, and then I give credit to Southern Guilford and Southwest Guilford.
“They came out ready to play and when we didn’t. So, I told our guys that our mental approach has to be different. We’ve got to come out with energy. We’ve got to be ready and that starts with them and how they approach the game.”
Jacari Brim and Baskerville were named to the all-tournament team.
Despite losing the last two games at the Sheetz tournament, Marlon Brim took some positives from both it and the Frank Spencer
“I thought it was pretty good. It gave us a chance to play in the Frank Spencer, was something that they wanted to play in. They will remember for the rest of their lives,” he said. “But I also thought the Sheetz was another tournament that gave us a chance to play different competition. We don’t see those guys every year.
“So, I thought the tournament was pretty well and we may do it again next year. But I enjoyed playing in both Christmas tournaments over the Christmas break.”
West Forsyth (6-5, 2-1) was scheduled to play at Reagan (7-4, 3-0), which won the Atrium Health Wake Forest Baptist Bracket, in the Frank Spencer, on Tuesday night in a Central Piedmont 4-A game.
Following the Reagan game, West Forsyth plays host to Davie County (11-2, 1-2), in another CPC game.
“They’ve gotten healthy,” Marlon Brim said of Reagan. “I’ve seen them play a couple times, and I thought, man, they play hard. I just think we have to match their energy and intensity. And we have to do the little things that we haven’t done lately. And I think if we do those things, we have a real good chance.”
As for the West Forsyth girls, they also played in the Sheetz tournament. They lost to High Point Christian 45-32 in the first round, then lost a consolation game the next day to Wesleyan Christian Academy 40-32. In the seventh-place game last Thursday, West Forsyth routed High Point Central 60-5.
The girls team also played against Reagan on Tuesday.
West Forsyth (6-6, 1-2) played at Reagan on Tuesday night and will host Davie County on Friday. West Forsyth (6-6, 1-2 CPC) defeated Reagan 40-29 in the first round of the Bell Davis Pitt Bracket of the Mary Garber Holiday Tip-Off Classic before Thanksgiving.