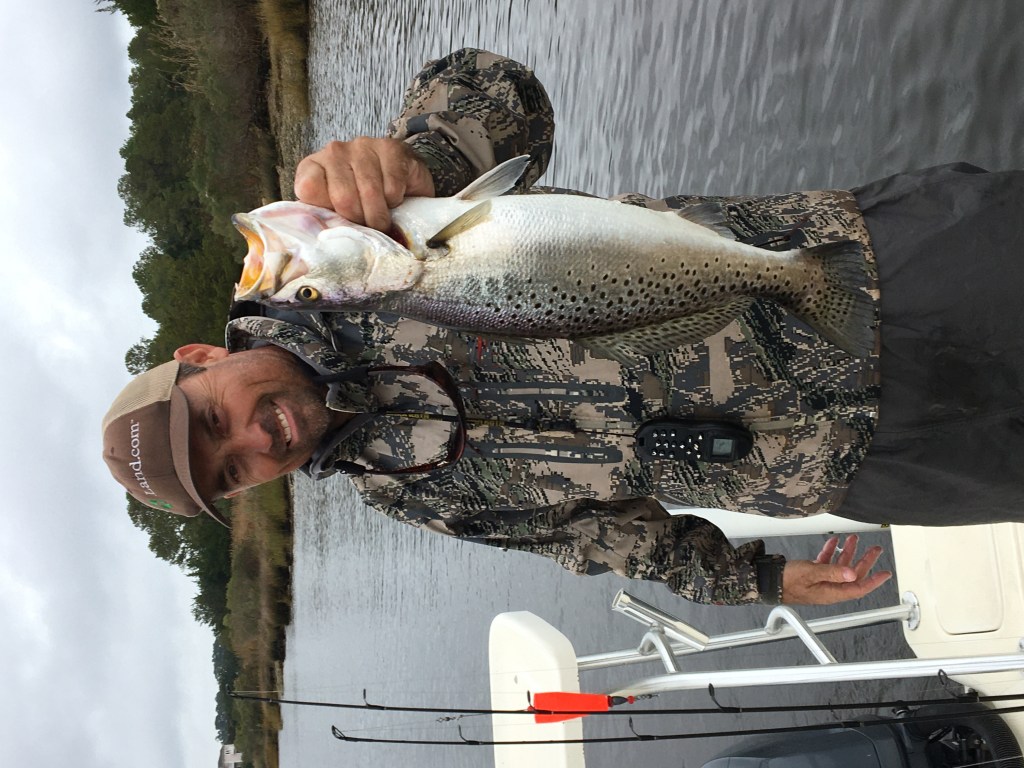 Dan Kibler photo A handful of moderate winters have allowed North Carolina anglers to catch plenty of speckled trout, and quite a few big ones, like this 24-inch beauty caught by Lumberton native Jeff Burleson at Little River Inlet on the North Carolina/South Carolina border. Will the pre-Christmas blast of cold weather end that great action?

I wondered about 10 days ago how many other sportsmen were caught between a rock and a hard place the way I was.
Just before Christmas, a huge, cold-weather front descended on the Carolinas, along with much of the east coast. The temperature dropped 20 degrees in an hour or two, and we were treated to a bitterly cold, if not white, Christmas.
I immediately remembered dozens of stories I’ve heard over the years from waterfowl hunters describing similar weather situations. They were usually associated with some of the best duck- and goose-hunting days afield, with the approaching cold weather driving thousands and thousands of birds down from the north, a migration that put them on ponds, rivers and backwaters filled with lucky hunters who recognized the opportunity.
I remember a big cold front late in duck season several years ago that had hundreds of ducks circling high over the Davie County impoundment I was hunting. The only problem? The cold front was so strong, it had frozen over the impoundment, and despite my son’s efforts at breaking the ice, those ducks just kept circling and circling, never finding a wet place to drop in. But that was just bad luck under perfect circumstances.
At the same time I was thinking about cold fronts and duck hunts, I had a terrible thought. The cold front was just the kind of thing that sends chills down the spines of saltwater fishermen. When the mercury crashes, often the speckled trout population follows suit. A sudden, 10- to 15-degree drop in the winter water temperature can result in what biologists like to call cold-stun kills, and speckled trout are the primary victims. They cannot function in water temperatures in the mid-40s or lower, and if the temperature drops quickly into that range, they can’t escape their normal winter haunts and find warmer, deeper water in time. Many will be stunned, die and float to the surface.
North Carolina hasn’t had a bad cold-stun kill on speckled trout in years, February 2018 to be exact, and that one wasn’t nearly as widespread as others in the preceding decade, but it wiped out a good number of specks. No cold-stun events since that time, almost five years, have allowed for an explosion in North Carolina’s speckled trout population, most noticeable on the upper end, size-wise. In 2022, North Carolina boasted a new state-record speckled trout and another monster that appears likely to become the world-record speckled trout for a female angler — plus plenty of other big fish.
In past years, cold-stun events have resulted in the N.C. Division of Marine Fisheries doing things like closing the season on trout for several months to try and let the remnant survive long enough to spawn. A series of cold-stuns factored into the lowering of the daily creel limit to its current, pitiful level of four.
A day or so before the bone-chilling cold arrived, NCDMF asked fishermen to report cold-stun kills. Biologists are up and running this week, trying to get a grip on how bad a Christmas present fishermen really received.

Next weekend, because of a family member’s health issue, I will miss the Raleigh Bass and Saltwater Fishing Expo for the first time in more than 15 years.
The show is the finest in the Carolinas, bar none, running from 9 a.m.-7 p.m. on Friday, Jan. 13, and Saturday, Jan. 14, and 10 a.m.-5 p.m. on Sunday, Jan. 15, on the N.C. State Fairgrounds.
The show annually kicks off the fishing season for saltwater and freshwater anglers alike; it’s usually the first place we can see the newest in fishing tackle and boats — loads of both — basically in two buildings: the Exhibition Building and Jim Graham Building.
Bass pros on hand to give seminars include South Carolina’s Davy Hite, one of only two bass pros to win the Bassmaster Classic, BASS Angler of the Year and FLW Tour Championship, Alabama’s Timmy Horton, and Randy Howell, the Lake Gaston native and Bassmaster Classic champion who now lives in Alabama.
Crappie experts Whitey Outlaw, Matthew Outlaw and Shane Walser will give seminars, along with catfish specialists Timothy London and Elsten Perez, and on the saltwater side, there’s kayak wizard Jerry Dilsaver and guides Jot Owens, Tanner Lynk, Noah Lynk and Bobby Brewer.
With the Central Carolina Boat and Fishing Show missing from the Greensboro Coliseum’s schedule this year, the Raleigh show will be about the only big fishing show for North Carolina anglers.