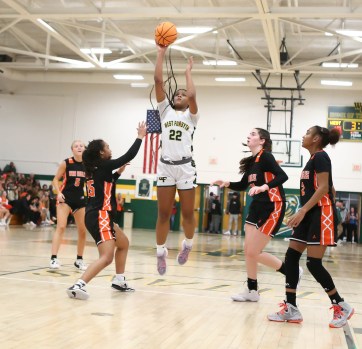 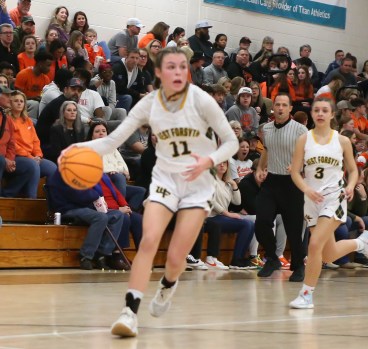 Titans will play Reynolds, East this week and have nonconference games on Saturday

Last Friday’s home game at jam-packed Simpson Gym against Davie County, and last Tuesday’s road game at Reagan are, so far, a microcosm of the season for the West Forsyth boys basketball team.
West Forsyth was defeated 64-46 by Reagan in its first Central Piedmont 4-A game since Christmas break. However, three days later, West Forsyth responded and edged Davie County 63-59.
As for the West Forsyth girls, they beat Reagan 36-30 last Tuesday and lost to Davie on Friday 50-35 to fall to 7-7 overall and 2-3 in the Central Piedmont 4-A. It was the second time this season the girls have beat Davie, including a season-opening win in first round of the Mary Garber Tournament.
Jeanna Baskerville led the Titans with 12 points in the win against Reagan and Campbell McClain added seven.
“That’s Titan basketball right there,” Coach Marlon Brim of West Forsyth (7-6, 3-2) said after the Davie win. “That’s how we want to play. We want to play tough, defend, packed house, crowd going crazy. That’s what we want.”
In the Davie game, Jacari Brim had 23 points, seven assists, seven rebounds and two steal, Kenneth Bartlett had 16 points, six rebounds, four assists and four steals, Cam White contributed 14 points, seven rebounds, five assists and two steals, and A.J. Baskerville added 10 points, 17 rebounds, four assists and two steals.
“We don’t want to be a one-man team,” Marlon Brim said. “We want to be able to have four scorers in double figures. And we feel like we can do that, we’ll have a great chance every game.”
Davie (11-4, 1-4) led 59-55 after Jackson Powers, who led with 22 points, nailed a 3-pointer with 2:48 left to play. However, Jacari Brim, Marlon Brim’s son, hit a 3-pointer with 2:26 left, and Marlon Brim immediately called timeout.
“When we’re focused and catch the ball in rhythm, we shoot it very well,” Marlon Brim said. “When we stand still, catch, we don’t shoot it well. And that’s what I told them at halftime. For us to be better, we’ve got to get penetration, kick and then be shot-ready. Other than that, I thought we shot it like we’re supposed to shoot it.”
After missing the first of two free throws with 43.7 seconds left, Baskerville made the second to knot the game at 59-59.
“I’m glad these kids stepped up tonight,” Marlon Brim said. “They haven’t been in a situation like this. We stepped up. Jacari made some big plays, Cam made some big plays, A.J. had some good defensive rebounds. It was just a great team effort. Buddy, off the bench, Kenneth Bartlett played well for us. I think that was the key.”
Bartlett gave the Titans the lead for good with 12.5 seconds remaining to take a 61-59 lead. Bartlett sealed the game after stealing the ball and converting a layup at the buzzer to make it 63-59.
“He played the way we want him to play coming off the bench, giving us energy, effort, a scorer,” Marlon Brim said of Bartlett. “That’s another point guard on the floor because that’s — we’ve got four guards on the floor and it’s hard to guard. A.J. can guard anybody in the post, so we feel great with Buddy (Bartlett).
“He’s finally getting healthy. I think he’s finally getting confidence.”
In his first season as head coach, Brim had a chance to see the rivalry between Davie and West Forsyth up-close.
“It was a great atmosphere,” Marlon Brim said. “The guys, the first time I walked out, it reminded me of the old Carver and North (Forsyth) games, you know, Carver-Glenn, back in the day. We got standing-room only. So, it was great to see. And I’m just glad we played well and did what we’re supposed to do to get the win.”
The West Forsyth boys and girls are scheduled to play at home against Reynolds Tuesday and at East Forsyth on Friday in conference play. The boys will also play Lee County on Saturday and the girls will play Atkins.
Coach Catrina Green has been battling an illness and was unavailable to comment following last Friday’s game against Davie.
The War Eagles (9-6, 3-2) took a 14-6 lead in the first quarter and never trailed, building the lead to 23-12 at halftime and 33-26 heading into the fourth.