Finding her way back 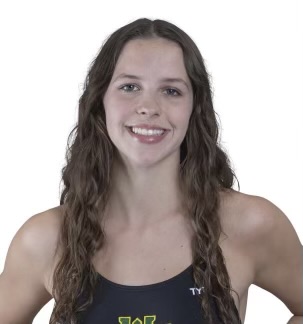 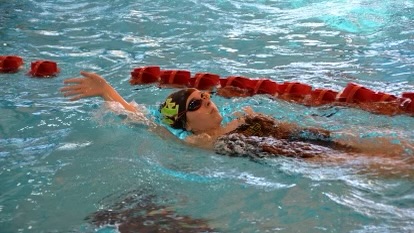 David Miller photo Bethany Davis doing the backstroke. An ankle injury slowed her progress last season, but the senior is now getting back up to speed

An ankle injury slowed Bethany Davis last season, but the senior swimmer is finally on the mend

Senior Bethany Davis of West Forsyth is the picture of perseverance.
Davis, who swims for the Titans, has swum since she was a child, but an injury in in a preseason scrimmage on the JV soccer team showed her just how much swimming meant to her.
“I just swim now because (between) my freshman and sophomore year I tore my ankle to pieces, and I had to get surgery,” she said. “So, I think it was my junior year, last year, I had gotten injured and I thought it was just a sprain. So, I went to (the NCHSAA Class 4-A) regionals (swimming) with West.
“And I was on crutches and stuff, but I pushed through it. It was intense, but after that I quit soccer because I don’t think it’s worth it to put my body through that.”
It was something that Davis, who also swims for TYDE, her club team, and her coach, Sandy Thomerson of West Forsyth, discussed and worked through.
“It hurt her a little bit because I think that was regionals,” Thomerson said. “She could only do the relay and it was tough. So, I don’t know that’s affected her now, It may have affected her for a good six months, maybe, or more.”
The injury she suffered was to her right ankle.
“It was gross,” Davis said. “I had sprained it a couple months before, and I think I just got back too early and I reinjured it again. Yeah, I just had a bunch of different tears in my foot and ankle region.
“And, you know, I kept swimming on it and I didn’t really let it heal, so they had to go in and clean up a bunch of scar tissue.”
With many injuries, many people on rehab use a pool. Swimming was already something Davis was doing.
“It definitely was one sport that I could continue to do through that injury,” she said. “So, I was thankful for that. Honestly, I think it helped me realize that something wasn’t right. It definitely did help me realize that, OK, this is still hurting a year later after I got hurt.”
Davis said she is more of a sprint swimmer. She competes in the 50-yard free, 100 free, 200 free and 100 back.
“When I first got hurt, they were thinking it was a regular sprain, like I had done a couple months before,” she said. “But I just kept on — I did weightlifting, and I swam, and I kept on doing stuff. And so, a year later it was still giving me some issues, so I went back and I got an MRI.
“That’s when they were like, ‘Oh, yeah, you actually have torn like eight things.’”
Davis had arthroscopic surgery on her ankle last March.
“They just went in and they cleaned up all the scar tissue, sealed it back up, made sure nothing else was torn,” she said. “And then I did rehab for a good bit because I actually got an infection. It was real bad.
“I wouldn’t have gotten it, but it was when I was taking off the surgical tape that was helping seal it together, it reopened the wound. And I had gone on vacation with that open wound and it just got infected. So, that really was a big setback.”
Despite the scars, Davis has become the senior swimmer that she, Thomerson, and the Titans were hoping for.
“I have seen a difference,” Thomerson said. “She is swimming faster, I think than it seems last year, anyway, at least the few meets we’ve had.”
Even with this ankle injury, it never affected the type of person, or the type of teammate Davis was and is.
“She’s a goofball,” Thomerson said. “She’s just a fun-loving one. She’s always joking around trying to make everybody laugh.”
Davis missed most of last summer with TYDE, wearing a walking boot. She was able to get back in the pool just before school started last August.
“Honestly, it was kind of, what’s the word — it hurt my self-esteem a little because of how much progress I had lost,” she said. “Because I was at a peak point before surgery, and I got back in and I just felt like a slug.”
The injury wore on Davis, both physically and mentally.
“It was exhausting just because I couldn’t make any of the intervals,” she said. “People were lapping me.”
Davis swam in the Sawyer Invitational just before Christmas at the Greensboro Aquatic Center. She clocked 28.74 seconds in the 50 free and 1 minute, 2.87 seconds in the 100 free.
“Honestly, to this day, I still have some issues with random pain and tightness,” she said. “But I think it’s really taken me awhile; I think just past month is when is when I really felt like I’ve gained back all my progress.”
Davis said that her favorite event is the 100 free.
“Honestly, I really enjoy the 100 free just because with the 50, I love sprint, but that’s really not enough time for me, I think, to really build up speed,” Davis said. “So, with the 100, I feel like I can really show how fast I can really go. And it’s not too long. You don’t have to sprint for too much.”
Unfortunately for Davis, her senior season for the Titans is quickly coming to an end. The Central Piedmont 4-A meet is later this month, the regionals are scheduled for Feb. 4, and the NCHSAA Class 4-A state championship is scheduled for Feb. 10.
“I’m just going to put my best foot forward and just try to do the best I can in these last couple weeks,” Davis said. “But it’s definitely sad to move on just because now that I’m older and I’m realizing all these little things that I could be doing, I don’t have any time to do them.”