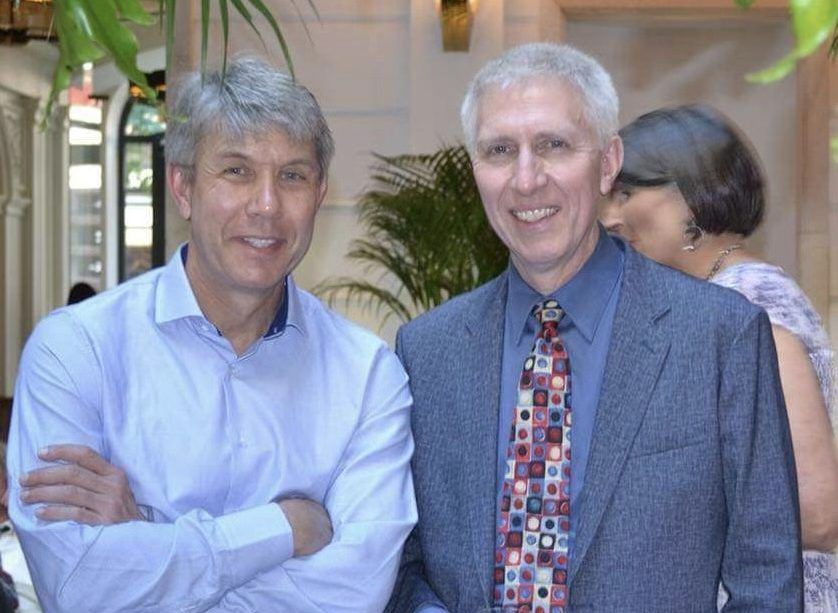 Dr. Don Heck spent his early childhood in Dallas, Texas, before his family moved to Clemmons when he was in the sixth grade. Spending his childhood in the Clemmons West neighborhood, he enjoyed summers spent at the pool participating on the swim team, and riding bikes with his two brothers.
“My main activity as a kid was soccer,” said the former midfielder. Heck continued playing soccer throughout high school at R.J. Reynolds. A standout player, Heck was recruited by various Division I schools to play in college. “I ultimately decided to attend Wake Forest University because I felt like it had the best combination of academics and soccer,” Heck said.

Heck played on the Demon Deacon soccer team for four years. “It was a significant time commitment, but it helped me organize my time for studying,” Heck said. “I initially came to Wake thinking that I would do something with math. Math was something that I enjoyed and I had some aptitude for it. However, after my first two years I wasn’t sure what I could actually do with it career-wise. Science was another subject that I enjoyed, so I began cramming a lot of courses in my junior and senior years at Wake in order to apply to medical school. I was a bit naïve at the time about medical school since we didn’t have any doctors in the family.”

Much like with soccer, Heck had worked hard academically while at Wake Forest, and was able to get into both of his medical school choices. Earning a scholarship to attend Duke University School of Medicine helped clinch his decision to attend the fall after graduating from Wake Forest. “I had a great experience at Duke. Some of my closest friends are from my time there. The teaching was terrific too,” Heck said.

After graduation, Heck began his radiology residency with BJC HealthCare in Saint Louis, Missouri. “I had considered a number of areas for concentration. However, I liked the idea of radiology. I enjoyed the problem-solving component, and the physics of the imaging,” Heck said. Heck completed his diagnostic radiology residency in 1997 and a fellowship in vascular and interventional radiology at Washington University School of Medicine in 1998.

As Heck continued gaining valuable experience, he became interested in a new area, neurointerventional radiology. “At that time, there were not really many neurointerventional radiologists because the technology was just starting to develop. I became interested in learning more and wanted more training,” Heck said.
Learning about the minimally invasive technologies to treat vascular conditions involving the central nervous system (brain, spinal cord, head and neck) was intriguing to Heck.
Thus, Heck elected to complete a fellowship in interventional neuroradiology at Johns Hopkins University School of Medicine. “Interventional radiology involves more direct patient care, which I find rewarding. I wanted to continue to have that interaction,” Heck said.

Heck’s interests would land him back to his hometown of Winston-Salem. “I never thought that the perfect job would open up where I grew up, but an opportunity presented itself at Triad Radiology and I have been here ever since,” Heck said.
“I have the privilege of caring for people in the community where I grew up, the community where my friends, family, parents, teachers and coaches taught and supported me, and I’m extremely grateful.”

Doing what Heck loves, and being near his family and children, Alex (24) and Julia (23) was an added benefit. “Up until recently, my parents (Dick and Helen Heck) lived in the same house where I grew up in Clemmons West. It’s nice to be able to have them close by,” Heck said. “My youngest brother, Dan, is also within driving distance in Chapel Hill.”

If not working or spending time with family, Heck enjoys physical activity. After hanging up his soccer cleats, he found an appreciation for triathlons. “My favorite was a triathlon at Lake Placid (New York). I vividly remembered watching the United States hockey team win the gold medal there, so it was really special to compete at that venue. My family was there cheering me on and I shared the experience with one of my best friends who was also participating, which made the whole experience extra special.” Heck said.

Whether it was professionally or in life, Heck said he demonstrates the sentiments of the late soccer player, Pele, who said: “Success is no accident. It is hard work, perseverance, studying, sacrifice, and most of all, the love of what you are doing.”