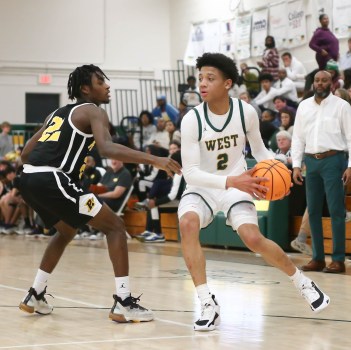 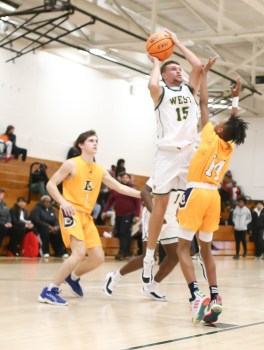 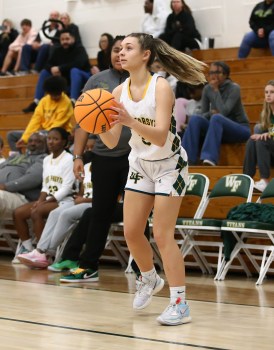 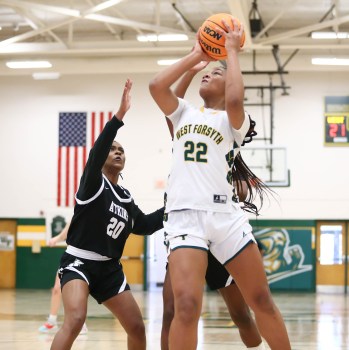 It was a strange week last week for the West Forsyth boys and girls basketball teams.
The West Forsyth boys defeated Reynolds at home last Tuesday, the West Forsyth girls were edged by Reynolds, and both teams were supposed to play at East Forsyth last Friday in another Central Piedmont 4-A game. However, that game was postponed because one of the goals in the gym at East Forsyth went sideways after a hinge broke loose in warmups before the girls game. Both games were postponed and were rescheduled for Feb. 1.
West Forsyth also played host to a Martin Luther King Jr. basketball showcase last Saturday, featuring boys teams from Atkins, Winston-Salem Prep, South Stokes, Lee County, Reynolds, Grimsley, Parkland, Walkertown and Ragsdale.
The boys defeated Lee County and the girls upended Atkins.
Cam White led four players scoring in double figures with 22 points as West Forsyth defeated Reynolds 75-61 last Tuesday.
Jacari Brim scored 16 points, A.J. Baskerville added 16 points and 20 rebounds for West Forsyth, and Kenneth Bartlett chipped in with 10 points.
“I thought we played pretty well (last) Tuesday,” Coach Marlon Brim said. “I thought we were consistent. We practiced on some things, and we looked pretty good on Tuesday. We kind of jumped on them early. We had great energy and everything from the start of the game.”
In the girls game, Reynolds nipped West Forsyth 51-50 despite 19 points from freshman Jeanna Baskerville.
The East Forsyth game last Friday was also set to be the final game of the first rotation of conference games.
“We were getting ready to load the bus and I got a call from (athletic director) Coach (Mike) Pennington not to leave if we hadn’t left,” Brim said.
“I wasn’t sure what the conversation was or what was going on. So, he called back about 10 or 15 minutes later and told us not to leave yet — that they had some issues with their goal. I’ve never had an equipment malfunction, anything like that. I’m just glad nobody was there to get hurt.”
Brim said that Catrina Green, the girls coach, showed him a picture of what happened to the goal.
“I think one of our girls shot a free throw and hit it the rim or something, and that made it go even worse,” he said.
The Titans brushed off the minor inconvenience and played on Saturday in the MLK Showcase. The girls team beat Atkins 37-21 behind 12 points for Jeanna Baskerville in the first game of the event.
The boys followed with an 85-58 win against Lee County to improve to 9-6 overall and 4-2 in the conference.
“We needed to play that game,” Brim said. “Instead of playing three games last week we only played two. So, that kind of helped us out with our legs.”
Baskerville had 20 points, Bartlett scored 16, and White had 14.
“We were pretty consistent with our four scorers,” Marlon Brim said.
West Forsyth was scheduled to play Mount Tabor Tuesday night. Mount Tabor defeated West Forsyth 81-61 in its first meeting, and Mount Tabor defeated West Forsyth 71-61 in the first round of the Frank Spencer Holiday Classic Pepsi Bracket.
Exams in Winston-Salem/Forsyth County Schools are scheduled to begin on Friday. Both the boys and girls are scheduled to play Friday night at Parkland and will be off until next Friday, when they will take on Glenn at Simpson Gymnasium.