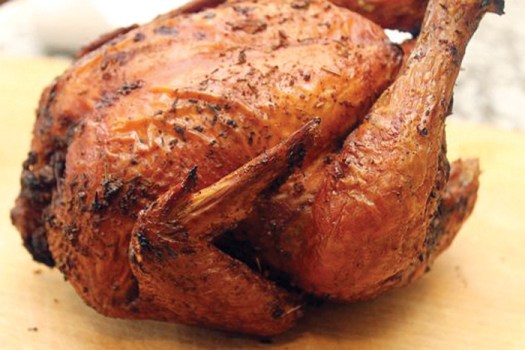 A Whole Roasted Herbed Chicken is one of the easiest and most delicious meals to prepare. 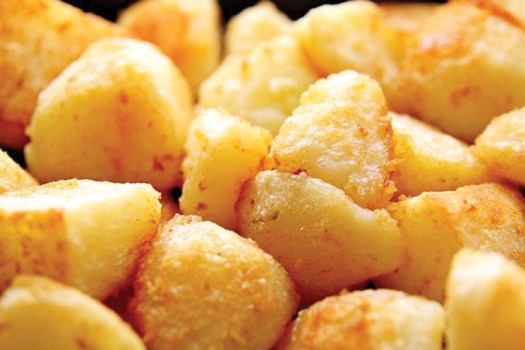 Vinegar and Salt or other flavored roasted potatoes served alongside any meat make a delicious side dish. 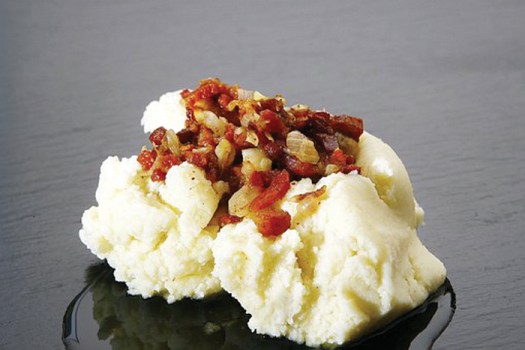 Roasted Garlic Cauliflower Mash engages the palate with a terrific blend of flavors. 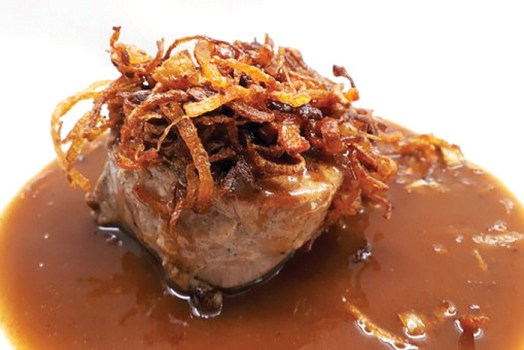 A modified orange sauce using sweet potatoes or onions would be a flavorful alternative with spiced pork tenderloin.

There’s no better way to get warm on a chilly night than sitting down to a satisfying meal of roasted meat and potatoes. Roasting is one of the oldest forms of cooking, traditionally meant cooking over an open fire. Today, the method for cooking is similar to baking, but uses hotter, heat to cook food in the oven. Roasting differs from baking in that the method often uses temps 400 degrees and higher. Higher temperature tends to bring out food’s fullest flavor. The method is good for meats and vegetables because they can hold up to higher heat due to their solid structure. So crank up your oven and elevate your menu with these cold-weather, comfort recipes.

Speaking of putting fire under it, there’s another kind of roast. Last fall my Rotary Club hosted a comedy fundraiser by roasting former local newscaster, Cameron Kent. All in fun, of course. A well-seasoned public figure, Cameron slightly cringed when scorched but fared well as friends and comedians held his feet to the coals, roasting him to perfection. As a result, the club donated a significant amount of money to benefit community causes.

This year, if you have a few extra hours on your hands and desire good company, your community could benefit. A good place to start is in church as most organize events that assist their community. Also consider joining a local Rotary Club, Woman’s Club, or other civic organization. Bound by a common cause, strong friendships are often formed.

Our lives are supposed to be about walking the walk of Jesus. As Christians, we’re in a season when we see Jesus’ mission revealed and He calls for us to follow Him.

In church on Sunday, we sang a beautiful hymn composed in 1912 by church organist Howard Smith titled “Love Lifted Me.” The hymn is said to have been inspired by scripture found in Matthew 14: 22-32 where Jesus’ disciples try to cross water during a storm. Peter attempts to walk on water but discovers he cannot without the help of Jesus.

We all walk through tough situations, but the Lord is always present to lift us. And if we’re walking in the footsteps of Jesus, in turn, we’re going to help lift others. This leads me to examine how we treat people. In our everyday lives, it seems people find it easier to roast folks — tearing them down rather than building them up. But Ephesians 4:29 points to a command to love and forgive one another the same way God loves and forgives us. We show love to one another by building up.

“Do not let any unwholesome talk come out of your mouths, but only what is helpful for building others up according to their needs, that it may benefit those who listen.”

Together we can take the chill off winter by warming up to folks. Let’s forego a roast and lift folks up instead, carrying them out of the fire.

In a pot, pour water over potatoes to cover them and add salt. Bring to a boil, partially cover, reduce heat and simmer 10 minutes. Add cauliflower florets and bring to a boil. Reduce heat and simmer 20 minutes until potatoes and cauliflower are tender. Drain well. Meanwhile, cut top of the garlic head and place in foil. Drizzle all with oil. Wrap and seal tightly. Roast in a preheated 375-degree oven for 1 hour and 15 minutes or until soft. Allow to cool. Melt butter. When garlic has cooled, squeeze roasted garlic cloves from their skins and add butter and garlic to the potato mixture. Mash the potato/cauliflower mixture and add half and half and salt. Continue to mash until smooth. Garnish with chopped chives.

• Salt and pepper to taste

In a preheated oven, broil all sides of meat. Set aside. In a large saucepan, combine broth, tomato sauce, tomatoes, onion, bell pepper, garlic cloves, salt and pepper, and mix well. Add the meat to the broth mixture. Bring broth mixture to a boil. Reduce heat, cover, and roast in a preheated 350-degree oven for 3 ½-4 hours or until meat is tender. Add additional broth if necessary and occasionally turn the meat. While roasting, in a saucepan, cook white onions, carrots, and potatoes in salted water until tender. Drain and set aside. During the last 15 minutes roasting the meat, add cooked vegetables to broth mixture. When done, remove meat and slice on carving board. Season the sauce to preference. Serve meat with sauce and vegetables spooned on top.

In a bowl, combine olive oil, chopped rosemary, garlic cloves, salt and pepper, and mix well. Add sliced potatoes and toss to evenly coat. In a 9 x 13 lightly greased baking dish, evenly spread potato mixture in the bottom. Roast while occasionally stirring in a preheated 350-degree oven for 35 minutes or until tender.

In a bowl, combine mustard, olive oil, garlic cloves, Italian seasoning and fresh rosemary, and mix well. In a lightly greased 9 x 13 baking dish, place potatoes. Evenly pour mustard mixture over all and toss to coat. Roast in a 425-degree oven for 40 minutes or until potatoes are tender. You can also use a plastic bag to easily mix potatoes with mustard mixture, and seal and shake.

Roasted Pork with Brie and Fruit

In a skillet, cook cut bacon, diced apple, and onion until bacon is crisp. Drain the mixture and place in a bowl in refrigerator to cool. When cool, combine bacon mixture with the cheese and mix well. In the pork tenderloin, cut a pocket. Stuff the mixture into the pocket, and tie closed with butcher’s string. In a roasting pan, roast the meat in a preheated 350-degree oven for 35 minutes or 160 degrees on a meat thermometer. Allow to stand 15 minutes before carving.

In a large roasting pan, combine potatoes and apples. In a bowl, combine maple syrup, melted butter and salt, and mix well. Pour the mixture over the sweet potato and apple mixture. Cover with foil. Roast in a preheated 350-degree oven for 45 minutes. Uncover and roast additional 30 minutes or longer until sweet potatoes are done.

In a bowl, combine molasses, soy sauce, curry base and ginger root, and mix well. Pour mixture into a  9 x 13 baking dish. Add pork and turn to coat. Marinate in refrigerator for 4 hours. Remove pork from marinade and discard remaining. In a heavy ovenproof skillet,  heat oil on medium-high. Add pork to the skillet, and brown for 3 minutes on each side. Roast meat in a preheated 350-degree oven for 25 minutes or until 160 degrees on a meat thermometer. When ready to serve, cut pork into 1-inch slices and serve with sauce.

• Salt and pepper to taste

In a saucepan, bring orange juice, carrot, ginger root, garlic, cilantro and chile to a boil. Boil until carrots are tender and until liquid is reduced by half. In a processor, puree in batches. Strain into a bowl and stir in butter until it melts. Season with salt and pepper.

In a bowl, combine potatoes, oil, vinegar, salt and pepper, and toss to evenly coat. On a rimmed baking sheet, spread potatoes in a single layer on bottom. Roast in a preheated 400-degree oven while occasionally stirring, for 40 minutes or until tender and golden. Place potatoes back in the bowl and add 1 Tbsp. vinegar, pinch of salt and chopped herbs. Toss again to coat.

Remove giblets from chicken and set aside for gravy, if desired. Rise chicken in and out with cold water. Work fingers under skin and between breasts to loosen. Chop fresh thyme, rosemary, sage leaves and parsley. In a bowl, combine ¾ cup of mixed herbs with softened butter. Rub butter mixture evenly between skin and breast. Combine remaining herbs with onion, add salt and pepper, and place in cavity of chicken. In roasting pan, place the bird, and add chicken broth. Cover with heavy foil and roast in a preheated 400-degree oven for 1 hour. Remove foil and allow to roast 45 minutes or until thermometer reads 180 degrees. Baste with drippings in pan occasionally while roasting.

In a bowl, combine the cut potatoes with olive oil, shallots, garlic cloves, harissa seasoning and cumin and toss to evenly coat. Season with salt and pepper and toss again. Spread potatoes on 2 rimmed baking sheets. Roast in the upper part of a preheated 425-degree oven, while stirring occasionally for 45 minutes or until tender and browned. Allow to stand 10 minutes. 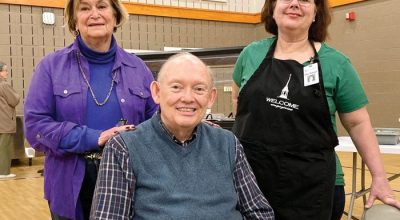 Bless Your Spoon — Food and fellowship at church 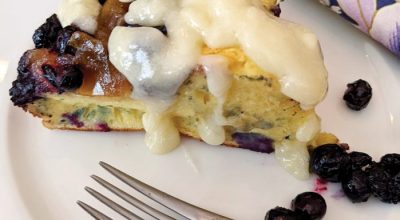 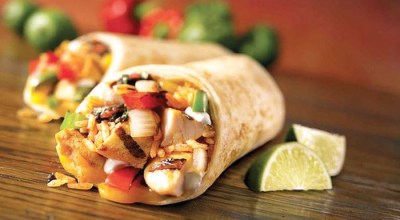 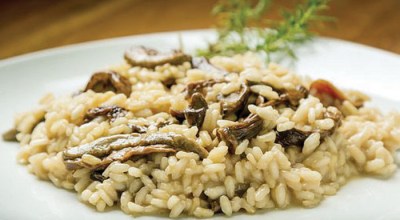