Half-full: Cayden Glass continues to challenge himself on the wrestling mat 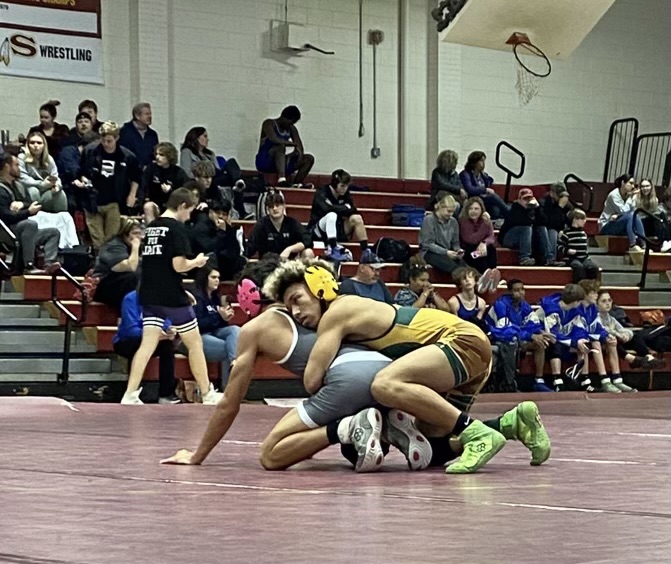 Wrestler Cayden Glass of West Forsyth might only be a sophomore, but he has supreme confidence in himself.
Wrestling mostly at 120 pounds and sometimes at 113, Glass picked up the sport because his father, Carson Glass, competed in wrestling in middle school and high school.
Cayden started wrestling in sixth grade at North Davie Middle School.
“I like how it’s one-on-one; I don’t have to count on anyone else,” Cayden Glass said. “I’m out there by myself and rely on myself.
“And I see it as a team sport as I put points toward the team.”
He wrestled at 113 pounds earlier in the season, which is now 115 after a two-pound allowance after Christmas. Now, he’s mostly wrestling at 120.
“It’s a little bit easier than 120 would be, less people,” Glass said. “The average weight of a high-school student is (120), so a there’s usually a lot of people at 120. I mean, I get more matches in, but they’re also harder because people are strong and they’re quick at 120. And there’s people with all types of experience.”

Competing in two different weight classes from time to time has its challenges.
“It’s easier to be at 120 than 113,” he said. “I have to cut (weight) all the time at 113.”
Glass said the last time he wrestled at 115 was two weeks ago. He has been fluctuating between 113-120 pounds all season.
“It’s not that hard (to cut weight),” he said. “I have to stay away from fast food and stuff, eat healthier, drink nothing but water, and workout, jog and run.
“I didn’t start cutting (weight) until we got the two-pound allowance.”
Even with his confidence now, it’s hard to imagine that he would’ve felt that way last season as a freshman.
“It was fun,” Glass said. “It was my first time in high school. High school was a lot different than middle school. But it was more fun being with the team, going to more places, more matches.”
Glass chose to attend West Forsyth because he saw the benefit of the Titans’ program and the strong schedule.
“I wanted to be somewhere where I could go to more places,” he said. “Davie doesn’t go to bigger and harder tournaments like West does.”
He does appreciate the rivalry that West and Davie have in the Central Piedmont 4-A. The two will square off on Thursday night.

“(The rivalry’s) fun,” Glass said. “You get to see friends again, but it’s also match day and you’ve got to take it serious, so I just go out there and do my thing.”
For Glass, being a freshman last season on an elite team was much different than being at a middle school in Davie County.
“In middle school, I was usually better than everyone,” he said. “Our program was just better. And high school’s a huge wakeup call. Everyone is good, so I’ve got to work harder and get better.”
Throughout last season, he sat down with Coach Jason Hooker of the Titans and the rest of the coaching staff to come up with a plan.
“I started going to my AAU practices with Combat,” he said. “They are on Mondays, Wednesdays and Sundays, and Mondays and Wednesdays, there’s just practice and live (wrestling) at the end. And Sunday is more live wrestling than practicing.”
Glass finished 28-12 last season and said that he needed to fine-tune some things. Glass played JV football last year but has since given that up.
After wrestling season last year, he went to Combat and he also was on the track-and-field team at West Forsyth, competing in the 100-meter, 200, 400, 4×400 relay, long jump and triple jump. His favorite events are long jump and triple jump, 100 and 200.
While jumping for the Titans he gets to compete with Tyson Adams, who won the 4-A state championship in the long jump during indoor and outdoor track.
“Tyson is one of the top guys in the state,” Glass said. “It’s just hard to come near his jumps.”
Last summer, Glass was going to run AAU track, but he chose to wrestle throughout the summer after losing last year in third round of the consolation bracket in the 4-A regionals. He also went to wrestling camp in Pennsylvania with Combat.
Glass, as of late last week, was 20-11, wrestling mostly at 120 pounds
“I didn’t really think much of it,” Glass said. “I think there were more freshmen coming in, and there were a bunch of guys on our team. I was helping out with them.
“My wrestling partner, Anthony Zahn, he’s a freshman, too, and I practice with him and help him out.”
With Zahn, they do drills, live wrestling, and help each other with weightlifting.
“Me and him have a brotherly bond,” Glass said. “We hang out all the time. He’s the most positive person I talk to on the team.”
After the Davie match on Thursday, West Forsyth has a Central Piedmont 4-A tri-match on Jan. 25 at Mount Tabor with Mount Tabor and Reagan. The state dual-team tournament starts Jan. 28 and runs through Feb. 4. The individual regionals are Feb. 11, and the individual state tournament is Feb. 16-18 in Greensboro.
“I think (wrestling) has helped with my personality.
“I think it’s helped out me become more of a leader, and not as much of a laid-back, chill person. I’m working hard, trying to be the best.”