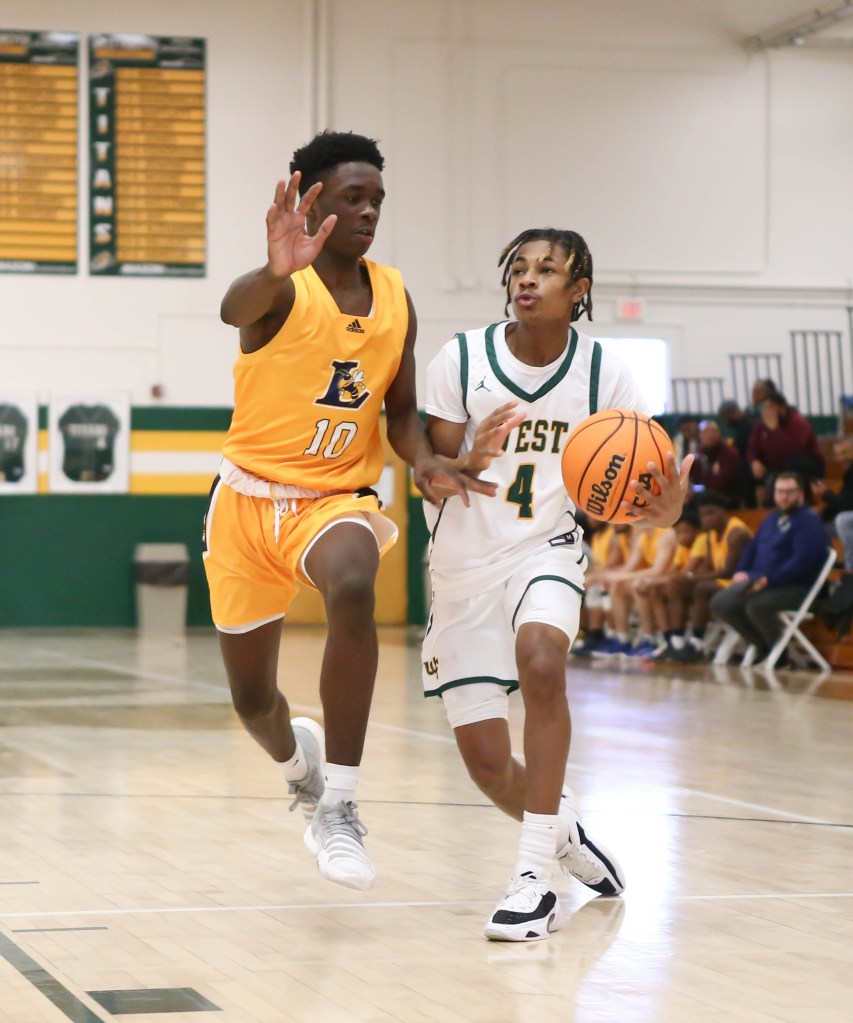 Brad Richard photo Kenneth "Buddy" Bartlett provides a spark for the West Forsyth basketball team off the bench. The sophomore has overcome an early-season injury and is averaging 7 points per game.

Kenneth Bartlett of the West Forsyth boys basketball team isn’t your everyday, prototypical sixth man on a team.
And he’s literally a buddy to his teammates and the coaching staff for the Titans. After all, Bartlett, who is nicknamed Buddy because his father, Kenneth Sr. goes by Big Buddy.
Officially, Kenneth Jr. goes by Buddy Jr.
Bartlett, a 5-foot-8, 145-pound sophomore, is the fourth-leading scorer for the Titans at 7.1 points per game. And that was after he missed the first six games of the season with a broken finger. His first action was against Mount Tabor in the first round of the Pepsi Bracket of the Frank Spencer Holiday Classic, which was just before Christmas.
“I just know that when it’s time for me to get out there and play I’m going to do my job,” Bartlett said.
Bartlett moved to the area two years ago after living most of his life in Queens, N.Y, and Long Island, N.Y. He played for the Titans last season under Coach Kevin King, where he was also the sixth man.
“I had a chance to see him play in some AAU games and I really liked what he brought, what he could bring to the table for us as a basketball player,” said Marlon Brim, who is in his first season as the Titans’ coach.
Bartlett hasn’t begged to be a starter.
“I feel like it would be better if I started, but I help my team either way,” Bartlett said. “It doesn’t matter if I start. I know what I’m worth. When it’s time for me to get in the game I play how I play.”
Even though Bartlett is playing sixth man for the Titans, don’t let that confuse you. He’s not necessarily pigeon-holed there.
“Buddy was injured the first four weeks, so he missed about six or eight games,” Brim said. “He’s really starting to get back into what we thought. So, right now, coming off the bench is great because that helps — that doesn’t mean where we see him at the rest of the year, or even next year.
“He’s a very important piece to our program for the next 2 1/2 years, that’s counting this year and the next two years. So, we see Buddy as a starter. We just hated that his first game was the Frank Spencer.”
Bartlett has rebounded nicely from his early-season injury. Last week, in a 75-61 win against Reynolds, he scored 10 points. And in last Saturday’s 85-58 win against Lee County, Bartlett had 16 points.
“(The game) is the same,” Bartlett said. “I just pay attention to what I’ve got to do.”
Knowing that he’s eventually going to come into the game relatively early, Bartlett has to prepare himself when Brim sends him in the game.
“When I’m on the bench I just cheer my team up, and when I get in, I play defense, push the ball, Bartlett said. “I’ve got to do the same thing because that’s my position. I’ve got to do what I’ve got to do.”
With the way Bartlett is playing with 3 1/2 weeks left in the regular season, he might average in double figures in points by the end of the season.
“So for us, he’s working his way back. He’s feeling his way back,” Brim said. “We are excited to have him come off the bench and give us that scoring power and give us what he gives us. But we also know he can start for us, as well.”
A prime example of just how dynamic Bartlett can be happened in the Davie County game on Jan. 6 in Clemmons, in which West Forsyth won 63-59 in a Central Piedmont 4-A showdown. In that game, Bartlett had six rebounds, four assists and four steals. But it’s what he did at the end of the game is what really stood out.
Bartlett scored to give the Titans the lead for good with 12.5 seconds remaining.
“That was a big moment, not just for me, but for us,” Bartlett said. “Their coach (Josh Pittman of Davie) said (Coleman Lawhon) was the best point guard in the conference. So, we proved him wrong.”
Bartlett sealed the game after stealing the ball and converting a layup at the buzzer to make it 63-59.
“I didn’t have any thoughts at all,” Bartlett said. “I was just in the moment. I was just happy. I was excited. I was just happy we got the win.”
Following the Davie win that night, Brim was effusive in his praise of Bartlett.
“He played the way we want him to play coming off the bench, giving us energy, effort, a scorer,”Brim said. “That’s another point guard on the floor. We’ve got four guards on the floor and it’s hard to guard. A.J. (Baskerville) can guard anybody in the post, so we feel great with Buddy (Bartlett).
“He’s finally getting healthy. I think he’s finally getting confidence.
“I think this sophomore group can be very good and can continue to develop,” Brim said. “And I think he and Cari (Jacari Brim, Brim’s son), both, can lead the sophomore group to be as good as they want to be because I think Buddy will work as hard as anybody, and I think he’s only going to get better because he’s willing to work.”
There is still a lot season remaining, but the future looks bright for Barlett, everybody’s Buddy.
“I could be much better than what I am now,” he said. “…I’ve just got to tell my mind I can do it.”