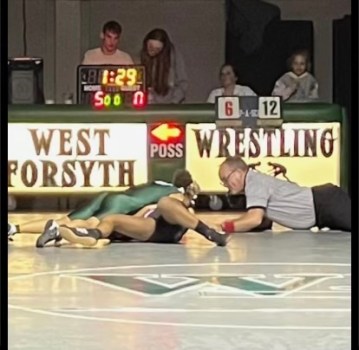 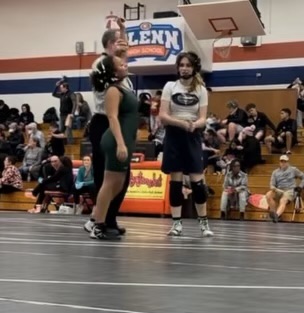 Freshman wrestler Alissa Neal is following in the footsteps of her sister, Breonnah and brother C.J. on the mats at West Forsyth

Freshman Alissa Neal may be a name you’ve never heard of attached to wrestling at West Forsyth.
However, the surname Neal is synonymous with wrestling for the Titans.
Neal’s sister, Breonnah, wrestled at West Forsyth when Coach Mike Bryant was the head coach. Breonnah Neal graduated in 2013, having won 111 matches wrestling against boys. After graduating from West Forsyth, she attended Campbellsville (Kentucky) University and King University in Bristol, Tennessee, to wrestle.
She is currently the women’s wrestling coach at Gannon University in Erie, Pennsylvania.
“My sister was a wrestler and I thought I would try it,” Alissa Neal said.
Alissa Neal is 14 and is trying to carve her own path in this, the first season girls wrestling has been a sanctioned sport by the NCHSAA, albeit with a 14-year age gap between herself and Breonnah.
“I did (wrestle at) a club my sister’s friend ran and then I kind of stopped,” Alissa Neal said. “And then when I got to high school, I started doing it again.”
Despite the age gap there is still sisterly bond.
“We’re pretty close,” Alissa Neal said. “She wanted me to do wrestling and that was kind of our bond. Working out and sports in general was kind of our bond.”
In addition to Breonnah Neal wrestling at West Forsyth, Alissa Neal’s brother, C.J., wrestled there and graduated in 2018.
“It interested me, and I thought I would try it to see if I was any good at it,” she said. “To see if I could get anywhere with it, and so far, I really like it. I think I’ll probably do it all four years.”
Alissa saw Breonnah wrestle and she wanted to do the same thing.
“I did a club,” Alissa said. “It was the Hard Knocks Club (in Greensboro) when I was 8. I did it for a few months then I stopped.”
Although she temporarily gave up wrestling, sports were still a big part of Alissa’s life.
“I played field hockey for a few years, I’m also doing that now,” she said.
Alissa Neal played field hockey for the Titans as a freshman this past fall.
“It was actually really fun,” she said. “I don’t really like not to do stuff. I’m a very productive person. These sports — I really like them both a lot. Doing both of them in high school is really fun, and I enjoy it.”
Alissa Neal said that while she was at Meadowlark Middle School last year, Breonnah Neal told her that girls wrestling would be a sanctioned sport this season.
“My sister talked to me a little bit about it,” Alissa said. “She just said it would be cool if I was on it, and to see how they ran it. And just to kind of feel it out, see how it went.”
Knowing how important wrestling was to her sister, Alissa jumped at the opportunity.
“I was very excited,” she said. “It seemed like fun and I could get a lot of friendships out of it. And to get to know a lot of people, and get to know rules, and just a lot about wrestling was something that to me was fun.”
Although wrestling is clearly imbedded in the Neal family, Alissa has her own perspective.
“It’s kind of an escape from a lot of things,” she said. “You can also get anger out, just like a lot of different feelings out. It’s really fun, especially when you win.”
Wrestling at 120 pounds, that’s perfect for Alissa Neal.
“I usually stay in the 118 to 116 range,” she said. “So, I never really have to cut weight. As long as I stay from 116 to 120 then I’m usually good.”
From her view on the mat, she’s had a stranglehold on the season.
“I think I’ve gotten better,” Neal said. “At the beginning I didn’t feel confident wrestling, but now, I feel a lot better with how I’m wrestling. I definitely had to get my head in the right space. The mindset is a very important thing, especially with wrestling because with a bad mindset it definitely puts in you a bad space.”
Alissa Neal confides in Coach Jason Hooker as she continues to learn the sport.
“With a lot of things that I couldn’t get, I would ask him a lot,” she said. “He definitely helped me on some tips on how to do the moves a lot easier.”
Hooker’s experience as a long-time wrestling coach has definitely been passed to the girls team this season.
“It definitely feels good because knowing that he has a lot of experience and he’s harder on us, so it makes us work harder, so we don’t have a soft coach that says we’re doing great even if we’re not,” she said. “…He encourages us a lot in the same way he does the guys.”
The season is rapidly coming to an end and Neal will be competing this Thursday at the NCHSAA Midwest girls wrestling regional at A.L. Brown High School in Kannapolis. If she makes it out of the regional, the state championship is Feb. 3 at Rise Indoor Sports Center in Bermuda Run and Feb. 4 at the Greensboro Coliseum Fieldhouse.