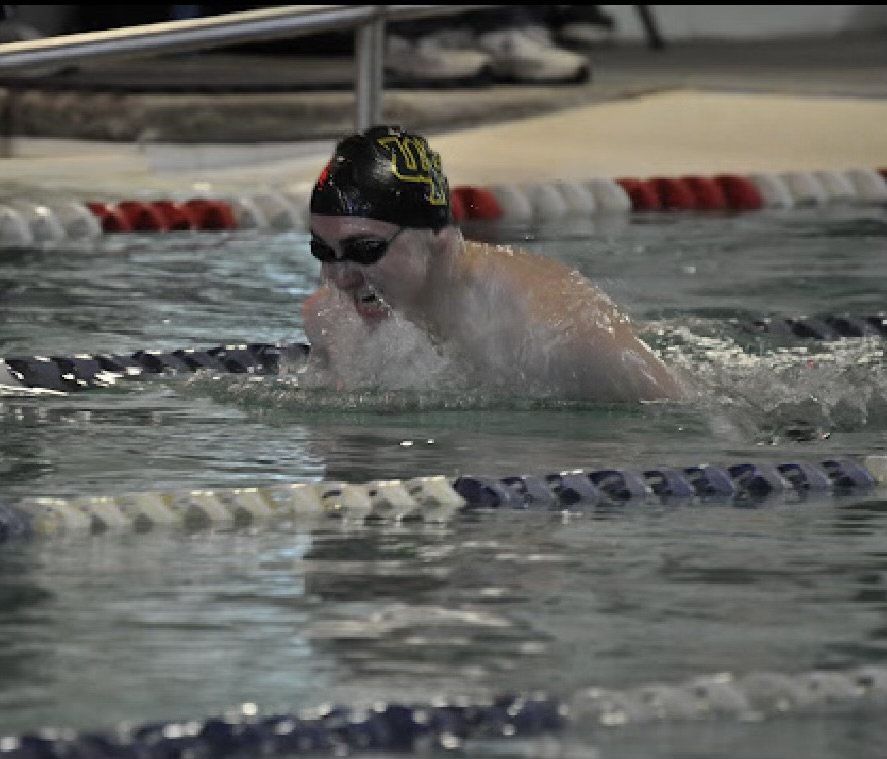 Senior Aidan Oghalai is showing the wear and tear of a high school swimming team late in the season.
Oghalai, who swims the 50-yard freestyle, 100 free, 200 free, and 200 medley relay at West Forsyth, has competed throughout much of the season with a shoulder injury.
“I think it’s from overuse. I lift a lot,” Oghalai said. “I’ve been swimming nonstop, almost for the past year, so I think it’s just worn out.”
Despite his shoulder problems he still competed last Friday in the Central Piedmont 4-A swimming-and-diving championships. All the while, knowing he was having an MRI on his shoulder the next morning.
Before the MRI, he took as much time off as possible from swimming in order to swim last Friday at the conference meet. Before that, the previous time he had swum was the week before on a Thursday for his club team, TYDE.
“I wasn’t even aware he had shoulder issues at all until Bob Jennings, the head coach at TYDE, sent me a message and said, ‘I heard Aidan’s hurt.’” Coach Sandy Thomerson of West Forsyth said. “This was right before conference, and I was like, ‘News to me.’”
Thomerson was Oghalai’s first coach at TYDE when he started swimming around 7 years old.
“So, I sent him a text and he said it had been bothering him, that he would still swim,” Thomerson said. “It didn’t show Friday in conference at all. So, he swam through it.” 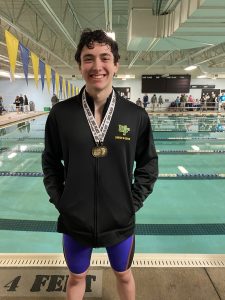 Oghalai was on the 200-medley relay team that finished second at 1:39.51 behind Reagan at 1:38.11. He also finished seventh in the 50 free at 23.98, fifth in the 100 free at 53.34, and second on the 200 free relay team at 3.19.95.
Oghalai’s times in the relays qualified him for the 4-A Central Regional, which is scheduled for Feb. 4 at the Greensboro Aquatic Center.
“Considering that I haven’t even been to regionals before I’m pretty proud of that,” Oghalai said.
Thomerson added that she will add him to the 50 free and 100 free.
“I’m not sure if he’ll qualify or not,” Thomerson said. “He’s, I’m going to say he’s ranked 40th to 50th, in that range, and they take top 24, but a lot of those guys that are in the top for those events, especially, won’t even swim those. They might be in multiple other events.
“So, I’m hoping he makes it in at least one of them. He will be in the relays, worst-case scenario. He’s going regardless.”
Although Oghalai’s shoulder has been barking for much of the season, he has a little time to recover before the regionals.
“He’s tough. He wants to be part of the team and contribute as much as he can, no matter what it means to himself,” Thomerson said.
Even though Oghalai’s is fighting through an injury, he knows his time as a high-school swimmer is coming to an end.
“This season’s been good, the best one I’ve had in my entire swimming career,” he said. “So, I’m very happy about that, especially since it’s my senior year. So, it’s a good season to close out on.”
All the while, Oghalai’s contemplating what’s next for him.
“I’m pretty sure I’m just going to quit swimming altogether,” he said. “I might swim in a club team in college. But if my shoulder injury allows, I’m going to try something new. I want to do long jump for track and field (in the spring).”
But Oghalai still has the regional and possibly the state championship the following week in Cary before his swimming career ends.
“I will take a swimmer like him than a super-fast swimmer who complains and doesn’t care, and isn’t a team player,” Thomerson said. “I would take him any day.”
Assuming Oghalai makes the track team for the Titans, he will compete alongside Tyson Adams, who has the longest jump in the nation, 25 feet, 11/2 inches, in his age group.
“I think it’s amazing,” Oghalai said of Adams. “I’m so impressed by him. I’ve never actually spoken to him, but from what I’ve heard it sounds like he’s a really great guy. Very humble.
“This is the first year I’ve even considered (competing in long jump),” he said. “I just wanted to try something new, and I don’t really enjoy running too much. But I do like competing, so I figured like long jump probably wouldn’t, I’m sure I wouldn’t have to run too, too much.
“And then I know a lot of guys on the team that I’ve been friends with for years, and they’ve been pushing me to try to do track. So, I figured this was a good way to join the team.”
That harkens back to more than 10 years ago when Thomerson saw a bright-eyed young boy who wanted to swim.
“He’s not changed a whole lot other than growing up,” she said of Oghalai. “He was always kind of quiet. Never caused issues, always got along with all the kids, was never rowdy. He works hard, puts his head down and does what he’s supposed to do.”
After track and field this spring and graduation this June, Oghalai has college plans. He’s already been accepted at Penn State and is waiting to hear on N.C, State, wanting to go to N.C. State if he’s admitted, to study environmental science or meteorology. He eventually wants to become a commercial pilot.
“Ever since I was a little kid I’ve always been fascinated by planes,” he said. “I think that they’re really cool, and I like messing around with big machinery. Flying an airliner would allow me to pursue my passion with that regard, and also be able to help people and take them to their destinations.
“I just really want to help people, you know.”

The boys finished second in the team standings and the girls finished third.