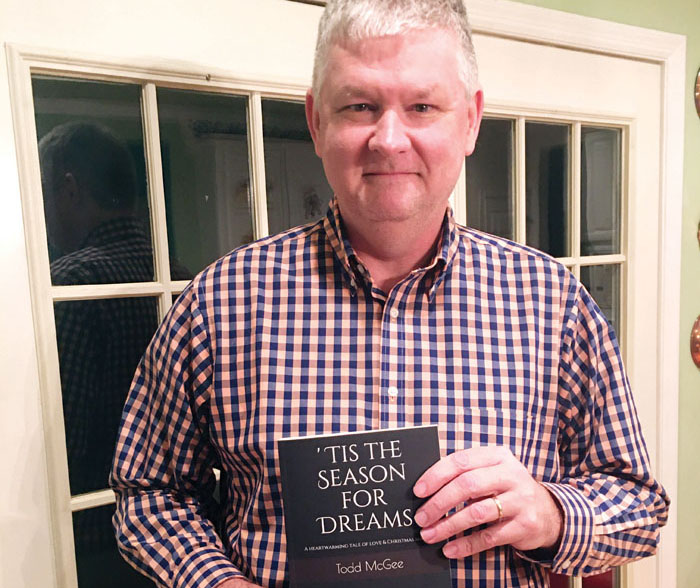 Clemmons native Todd McGee with his new novel, ‘’Tis the Season for Dreams’

Writing a novel is like giving a piece of yourself. It is not only giving of your talents to an audience that that can be both loving and kind and harsh. It’s an opening up of yourself, to tell a story that you want to tell. It can be as daunting as it can be rewarding. However, writing about something that you know can make it a little walk into the unknown. For new author Todd McGee, making his hometown the setting made all the difference on his road to finishing and getting his novel published. Fortunately, it is a bonus treat for local readers, as McGee’s hometown is none other than Clemmons.

McGee is a Clemmons native. After graduating from West Forsyth High School in 1981, he attended N.C. State University. Upon graduation in 1985, McGee made the decision to make the Raleigh area his new home. However, it’s hard to cut those hometown ties. Now, McGee uses those same ties to give his new novel, “Tis The Season For Dreams”, a strong foundation of familiarity and feeling of home.

“I’ve been writing professionally since I was a freshman at N.C. State University and signed up to be a sportswriter for the student newspaper, Technician. After graduating, I worked as a sportswriter for many years, and then transitioned into public relations. In my current job, I write press releases, speeches and articles for our website,” says McGee.

With years of writing experience, McGee decided to broaden his creative scope and answered the call from a prominent cable network to tell his “story in waiting.” “I got the idea for writing the book last year when I saw a tweet from Hallmark Publishing that they were looking for manuscripts from new writers. My wife and I have been watching the Hallmark Channel Countdown to Christmas movies for the last few years, so I decided to see if I could write something similar,” he added.

McGee places his hero’s story in Rutledge, Massachusetts, a fictional town that just happens to utilize such street names as Hampton Road and Peace Haven Drive. McGee even uses his high school mascot of the Titans in his new novel. “It made it easier to visualize the fictional town of Ratledge Falls by using landmarks from Clemmons. Instead of creating the layout for a new town, I just transported Clemmons about a thousand miles to the north. I used some of our street names, the high school mascot and colors and even some buildings and businesses,” he continues.

Although this is McGee’s first novel, he is on the road to making sure it will not be his last. He is already writing a novel set in WWII. “I’ve always been interested in World War II. There are so many incredible stories from that war, and it is the ultimate example of good triumphing over unimaginable evil. It’s difficult to imagine what it must have been like to live in occupied France and share your house with an occupying soldier,” he concludes.

With his first novel under his belt, McGee is not resting on his laurels. Much like that young boy riding with purpose to get his new baseball cards, McGee has his sights set on a new direction in his writing career. However, this time, Peace Haven Road does doesn’t lie ahead, it is firmly in his past, but still present in whatever fictional world McGee creates next.

McGee’s parents, W.C. and Diane, still live in Clemmons, as does his older brother, Hal, who lives with his wife, Denise, in the Rolling Green neighborhood. The book is available in paperback and e-book formats on Amazon (www.amazon.com/dp/B07ZJTW2JH) and is free to subscribers of Amazon’s Kindle Unlimited service.