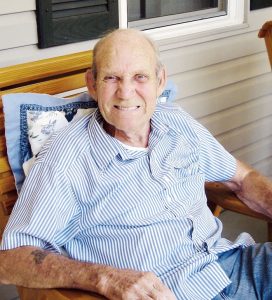 J.B. McCrary of Crossville, Tennessee, passed away in peace with the loving staff and community at Quality Care Rehabilitation Center in Lebanon, Tennessee, on Sunday, Dec. 15, 2019; he was 85. J.B. was a United States Air Force veteran, serving in the Korean War. He loved country music, maintaining his garden, and was an avid eater of biscuits and gravy. J.B. is preceded in death by his wife, Phyllis McCrary, and later wife Mary McCrary. He is survived by seven children, Debra Brown; David McCrary; Steve McCrary; JoAnne Doyle; Dorothy Hoffman; Eddy McCrary; and Marie McCrary, 15 grandchildren, and several great-grandchildren.

J.B.’s journey in his final years was unexpected and difficult; however, he had a strong support network that included his family, Dorothy, Lonnie, Theresa, Brian, and John of Clemmons; JoAnne of Akron, Ohio; and Debra of Monterey, Tennessee; along with the staff and community at Quality Care — all of whom served as his biggest advocates, and spent countless hours working to get him to a place, in a situation, where he could tell his story and pass away on his terms.

His funeral will take place on Saturday, Dec. 21, 2019, at Mayland Cemetery in Crossville, Tennessee, where he will be buried next to the love of his later life, Mary McCrary. In lieu of any gifts, the family just asks that well-wishers place time and emphasis on end-of-life planning and in who trust is placed, particularly at the later stages of life.

Obituaries for the week of July 7