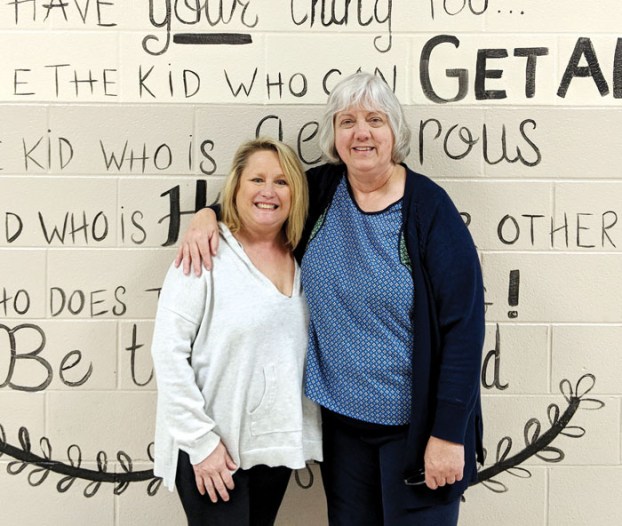 This comes from Karen “Kandy” Griffin and Marie Cross Daniel at Clemmons Elementary. The story begins with Griffin:

“I have been subbing in the office at Clemmons Elementary all year,” Griffin said.

“Since my son was in kindergarten, I have periodically searched for his kindergarten teacher, Marie Cross. But I was never able to find her, probably because I didn’t know her married name. Everyone in that very special first-year class adored Ms. Cross, and buckets of tears were shed when the school year ended.”

Griffin recently realized that Marie Cross is now Marie Daniel, who teaches second grade at Clemmons Elementary. Although Griffin had seen her at school, it was seeing on Facebook that Daniel’s maiden name was Cross that made it possible for the 30 years since her son was in kindergarten to drop away.

“Even when I first saw Marie Cross (Daniel’s) name on my Facebook page, it took me several seconds to process,” Griffin said. “I’ve always been one who ponders as I start ‘connecting the dots.’”

“Now that I have found her, I can easily see my son’s kindergarten teacher in Marie’s sparkling eyes and smile. After paying closer attention, even her voice is recognizable. We both have a few more character lines on our faces now, but she has aged with grace. I admire the enthusiasm and depth of caring that Marie has shared with her students for the past 30 years.”

“The teacher I see every day at Clemmons Elementary is the same caring and committed teacher she was 30 years ago.”

After Griffin made the connection, she wrote a letter to Daniel and read it to at school. Here’s the letter:

“2020: The Best Surprise of Coincidence”

“I did the research and picked what I thought would be the best elementary school for my son. Our family relocated so that he would be assigned there. On the evening of kindergarten open house, I was a tad doubtful about the choice I had made. My son’s new kindergarten teacher at Jefferson Elementary School was new in more ways than one. She was fresh out of college, and this was going to be her first class. I remember whispering to my son’s dad, ‘She’s just a kid.’”

“My doubts were quickly put to rest after school started. Somehow in a class full of rowdy kindergartners, my son’s teacher was astute enough to pinpoint every problem that had the potential of impeding his progress in school.”

“When instructed to move from one task to another, it was difficult for my son to shift his focus. Understandably, the teacher suspected a hearing impairment. My son was tested, and his hearing was normal, but I appreciated her zeroing in on his poor attention skills.”

“My son was never much of a troublemaker, but, at one point, he was disruptive in class, and his teacher did not hesitate to let me know. From then until now, I have remembered and will forever remember what she told me that my son said to her the next day (after I had given him the standard “respect your teacher” lecture). His definitive statement to her was, ‘I’m going to change my ways,’ and he did!”

“The kindergarten teacher noticed every behavior issue and academic weakness that arose that year. She was my teacher as well as my son’s teacher. I trusted her. I followed her lead on every suggestion she made and worked with my son on sequencing, lettering, spelling and reading as she instructed.”

“Something of a little nerd, my son had difficulty forming friendships, and his teacher counseled us on helping to improve his social skills. She even coerced him into wearing ’60s attire and singing “Doo Wah Diddy Diddy” along with his classmates in a skit. (I thought back to that skit when I joined my son at his favorite Nashville honky-tonk a few years ago, where he sang along with the band’s theme song, Elvis’ ‘Suspicious Minds’).”

“At one point during that kindergarten year, the teacher sent home a note that showed the character development in my son that I had hoped for. She wrote that he “did not give in to peer pressure,” and that note was a great source of parental pride for me. I still have it among my son’s childhood memorabilia.”

“My son never understood why other kids looked forward to ‘no school’ days. He loved school and preferred it to his only-child lifestyle at home. That kindergarten experience, that one teacher, molded my son into a student who loved school, loved learning and ultimately chose education as his career. In my mind and in many conversations with my son and friends through the years, I have expressed my appreciation for his kindergarten teacher’s expert, loving guidance.”

“This was a memorable first year for everyone in my son’s kindergarten class. The teacher and her students formed a loving bond. At the end of that school year, I think I shed more tears than I did when my son was graduated from high school or college!”

“My son’s kindergarten teacher taught him how to be a good student, how to appreciate good teaching, and even how to open his milk carton and tie his shoelaces. Through the years I have often wondered what became of this gifted teacher. I hoped that she would remain in teaching, and now I know she has.”

The day after Griffin read the letter to Daniel, Daniel brought in a framed cross stitch statement of appreciation from her 1990-1991 kindergarten class that contained the school pictures of all the children.

“It has been a delight to recapture memories of my son’s kindergarten year and to find Marie Cross Daniel right in front of me after 30 years!” Griffin said.

“Marie paved the way for my son to become Kyle Southern, Ph.D. (He earned his doctorate in higher education from the University of Michigan in December of 2019.)”

“Thank you, Marie, for being the best of all possible firsts in my son’s education. Forget about ‘Teacher of the Year’ accolades. You have my vote and my son’s vote for ‘Teacher of a Lifetime.’”

Griffin then brought in a number of items that she had saved from her son’s time in kindergarten so that Daniel could take a look at them. This is what Daniel had to say about it all:

“I am going to have to send random thoughts, because I am still in awe, humbled and honored that Kandy kept all of her son’s kindergarten notes from me, pictures, even a Mother’s Day cookbook,” Daniel said.

“I am beyond words and gratitude that Kandy kept Kyle’s kindergarten memorabilia. It means the world to me that I was able to be a part of their lives and the foundation for his future education.”

Daniel earned her bachelor’s degree at High Point College (now High Point University). Here is how Daniel came to be at Jefferson Elementary:

“I graduated in December,” Cross said. “So my first job was a substitute that turned into a long-term sub at Lewisville Elementary. Back in the ‘90s, it was hard to get a full-time teaching job. I got a job as a primary reading teacher at Griffith Elementary, but I wanted desperately to have my own classroom.”

“It was the summer of 1991, and I took my dad’s advice (even though it was out of my comfort zone) and went to every elementary school and asked to see the principal and handed out my resumé. I even had a binder with pictures, lesson plans, notes form parents, etc. and a videotape of me teaching.”

“My dad said, ‘The squeaky wheel gets the oil.’ Well, it was like 10 days before school would start, and I got a phone call from Mr. Steve McGuinness. He said, ‘I need a kindergarten teacher (that’s what I wanted), but we are making the computer lab into a classroom, and your assistant will be a previous office assistant that has had no classroom experience.’”

“I was hired! My parents — my biggest cheerleaders — helped me get my room ready. The walls already had the “Wizard of Oz” theme, so I added more.”

In the years that followed, Daniel earned a master’s degree at Gardner-Webb University and received her National Board Certification, which was renewed this year.

“I have always wanted to be a teacher and I truly love the students that come into my classroom and I strive to build relationships with the students and families,” Cross said.

“I have kept in touch with many students over the years … I have been invited to weddings, graduations, baby showers, and I have even been in workshops with previous students.”

She still thinks about others she has lost track of.

“And I often wonder what they are doing now.”

Now, with one of them, Daniel not only knows what he is doing but also how much she meant to his mother.

Clemmons Branch Library Events for the week of June 27 For more information on these and other programs, check the... read more