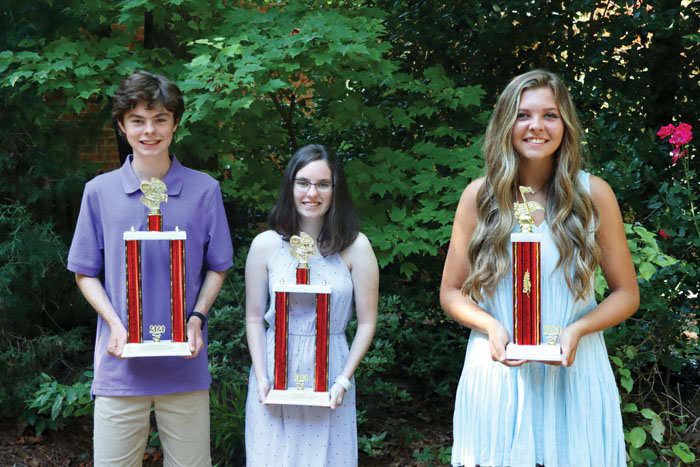 The National Federation of Music Clubs hosts 13 junior festival music events in the state each year as part of the NFMC’s national program. This year, more than 4,000 students competed state-wide in their local events. This year’s winners of the local competitions continued on to the NFMC state finals. Local students, from the music studio of Teresia Ann Queen in Advance and the Wake Forest district, brought home three state titles to Clemmons and Advance from this year’s nationally recognized competition.

Hymn playing is just one of the NFMC state finals categories. There are five classes in this category and for a second year in a row, two of the state titles were won by local Wake Forest festival winners, brother and sister Natalie and Jeffrey Lyons. Their parents are Mike and Karen Lyons of Clemmons, and Clemmons Presbyterian is their church home. Jeffrey, a rising 10th grader at West Forsyth High school, won the Carolyn Jones Summerlin Hymn Cup Class II title for North Carolina. In addition to music, Jeffrey likes to bike and also enjoys playing tennis and plays on the West Forsyth tennis team. He is an active member of Clemmons Presbyterian Church and sings with the CPC youth choir. Jeffrey is a six-year member of the National Federation of Music and his winning competition music included the two popular contemporary Christian songs “10,000 Reasons” and “As the Deer.” Jeffrey has previously won nine nationally recognized gold cups for excellence in piano performance from the NFMC.

The Class III Hymn Playing event was won by West Forsyth High School rising senior, Natalie Lyons. She is the 2020 state title winner for the Peggy Robinson Matthews Hymn award. Her winning performances included the traditional hymn “The Deep, Deep Love of Jesus” and a Hebrew selection from the required list, “Ose Shalom.” Natalie has also earned nine gold cups from the NFMC, which recognizes her musical excellence in piano performance. Her future plans include college after high school graduation with a major in biology or forensic anthropology. She enjoys reading, listening to music, participating in youth group and youth retreats with Clemmons Presbyterian Church and playing percussion in the West Forsyth Wind Ensemble. Natalie also plays percussion for the CPC church Christmas and Easter cantatas. Both Natalie and Jeffrey serve as youth church musicians at Clemmons Presbyterian.

The Sara Copley Moore Folk Singing award was won by Ryan Fussell, daughter of Matt and Alison Fussell of Advance. Fussell won the local Wake Forest junior festival event in the vocal American patriotic/folk songs category and represented our area to the state finals. She is a rising senior at Davie High School and sang with the Davie Madrigal Singers and Vocal Ensemble performing groups under the direction of Elaine Snow. This past school year, she sang under the direction of Brittany Darst in the Davie Show Choir and Vocal Ensemble. Fussell enjoys singing, learning to play the keyboard, photography, playing golf and spending time with family and friends. Her future plans include attending UNC Charlotte in the fall of 2021. She is a member of Pinedale Christian Church. Ryan won the state title and award with her performances of the folk ballad “Shenandoah” and a lyric performance of “America, the Beautiful.”

The NFMC has grown into one of the world’s largest music organizations since its founding in 1898. The organization provides opportunities for musical study, performance and music appreciation to more than 200,000 members nationwide in its 6,500 music-related clubs and organizations. The organization is dedicated to finding and fostering young musical talent and sponsor nationwide junior festivals with more than 117,000 participants. The mission of the NFMC is to advance and develop American music and musicians. It is non-profit, philanthropic and educational organization dedicated to music education and the promotion of the creative and performing arts across America.